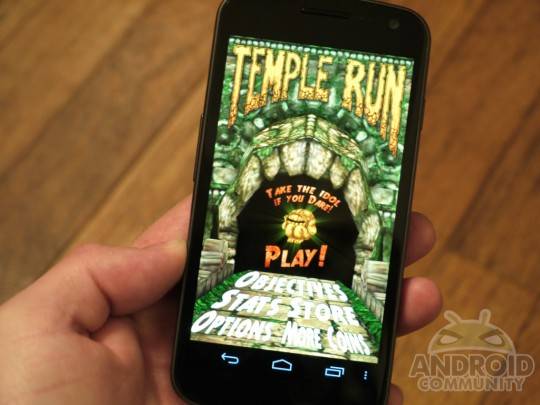 What was the first game you installed on your new smartphone or tablet on Christmas morning? Popular games like Angry Birds? Temple Run maybe? The developers behind the popular runner Temple Run have recently announced that just Christmas day alone their popular mobile game saw over 2.5 million downloads. A record in a single day.

Imangi Studios founder and Temple Run developer Keith Shepherd recently tweeted the news, stating that their game saw huge demand and unprecedented downloads on x-mas morning. Obviously Christmas is one of the biggest days of the year, and million and millions of mobile devices were surely activated. Pretty impressive, and they weren’t even in the top 5. I think Google Maps is still king of that hill.

Shepherd goes on to mention that this was actually both Android and iOS combined, but still, the numbers are quite impressive for such a small studio and game to still be having wild success. Temple Run saw over 1 million downloads from Android, it also hit the million download mark on iOS, then Amazon’s App Store also notched in almost 500k downloads too.

We all knew games were popular but this just goes to show you how many millions and millions of devices were received and instantly fired up for some gaming on Christmas. Maybe a few more developers should toss their games on the Amazon App Store too, considering those numbers were quite decent too. While 2.5 million sounds like a lot, the game hit the 100 million milestone in August.