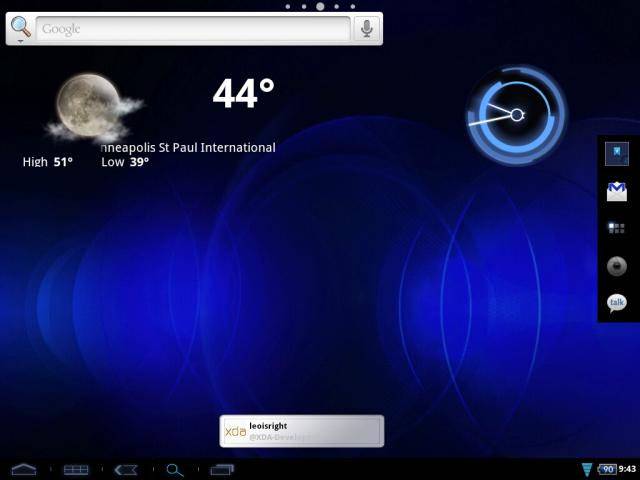 Just like the rest of us, the CyanogenMod team doesn’t have access to the Honeycomb source code, so for now the best they can do for custom ROMS and the HP TouchPad is Gingerbread. But themers are a crafty bunch, and since CyanogenMod is open sourced, a group calling themselves Team Xron has released a skinned version to at least make you feel like you’re using a tablet OS. Users won’t have access to Honeycomb apps, but the various customizations do make Gingerbread look pretty slick.

Installation is simple if you’ve already shoved CyanogenMod onto the TouchPad: just transfer the ZIP over, reboot, select ClockworkMod recovery and flash the new software. You’ll definitely want to make Nandroid backup, just in case the new color scheme doesn’t agree with you, and as always when dealing with community mods there’s no guarantees of success. I f you haven’t used the rather complicated SDK method of pushing the CM7 files to your TouchPad, you can just replicate the installation method and swap out the zip file.

In addition to the tablet makeover, Team Xron has added themed widgets and am appropriate wireless printing app. It looks like they’re updating frequently – certainly more frequently than CyanogenMod, which hasn’t released any new info since the Alpha 2 version weeks ago. Early reports indicate that the build is fast, but certain apps like Gtalk are having issues. Remember, CM7 includes its own theme engine, so if you’re happy with your current build it might be bust to just apply a community theme.

Still not sure about adding Android to the TouchPad’s native WebOS? Take a gander at our hands-on video.