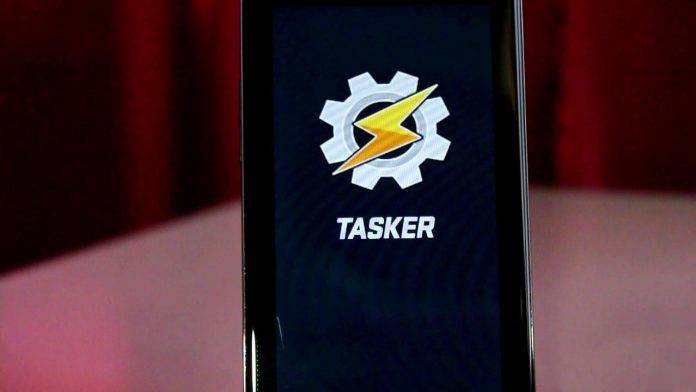 The reality is that with more and more native features being added to Android versions starting from Android Lollipop all the way to Android Nougat, we can truly say that you can do just about anything on your Android device. Add to that the fact that for any task you might imagine doing on your smartphone, we live in a time where there truly might be an app for any task you think of.

But for all the other things that are not available out of the box, there is Tasker. If you want your smartphone to become “smarter”, Tasker is the way to go. You can use Tasker to bind sensor data to apps in many weird and seeming ungainly combinations – but will work in your own personal context. But like inventions that are done by people who have the perseverance for trial and error, so it is with Tasker – you have to have the stomach to learn.

This is a deeper dive into what you should know about Tasker.

Tasker was released in 2010, at a time when Android devices were very limited in what they were able to do out of the box. Fast forward to 2017, and we’re looking at a very different Android environment. If you look at the feature-rich Samsung Galaxy S8, you might even think if an automation app like Tasker is still needed. 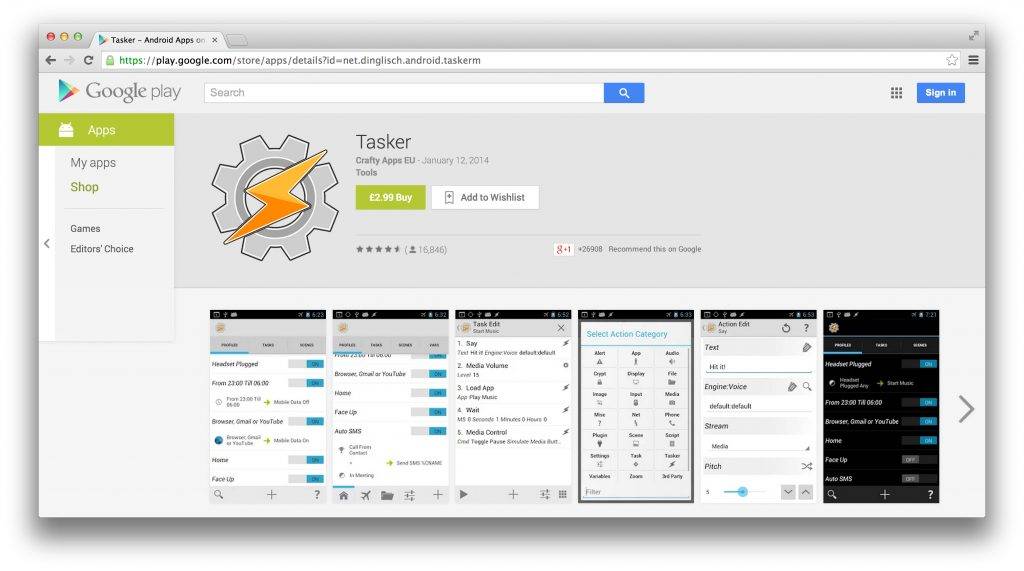 It started as an app project that was written for Palm OS, as early as 2007. It got launched in June 2010 for Android Froyo, and immediately built its reputation as one of the best apps you can have on Android. In 2015, there was a problem regarding the app causing system interference, and it was kicked out of the Google Play Store. But by that time, Tasker had already cemented its place as one of the best automation apps in Android history. It came back as a paid app in 2016.

The idea for Tasker may be a little vague for you at first. But here’s the simplest way to explain it – Tasker is an automation app that takes advantage of Android’s ecosystem and open source nature to help you do more with your Android device. In this sense, the possibilities for what Tasker can do are endless – it does many, many, many, many things. If you want your phone to turn on Bluetooth once you step into your car, it can do that. It can even connect to your car’s infotainment system just by sensor data or with your voice command. If you want to turn on your phone’s WiFi when you get home – and disable your lockscreen, and turn on the brightness to full, change audio profiles – it can do that just through sensing GPS data. You want your phone to ring loud – even overriding “silent mode” – for one specific contact to let you know that it is your wife calling? Tasker can do that, too.

And with the plethora of plugins available for the app, you can do even more, even if you can’t imagine it being able to do more than the endless things it is able to do on its own. For a lot of hardcore Android users, Tasker has replaced many standard apps just because it is able to specialize and personalize actions for apps in very unique ways.

We’re not going to lie to you – Tasker is heck intimidating when you first get to it, and it will all look like rocket science at that point. The learning curve for doing stuff in Tasker is pretty steep, so you have to be one of those types who don’t give up after a number of tries in trial and error, because that’s where Tasker actually shines as an automation app – it will allow you to shape the behavior of your desired tasks granularly until you get it just right for your daily processes. And that takes a LOT of time and patience. Even the official support app is not the easiest thing to navigate, but once you get the hang of it – it’s very much essential for your Tasker operations. 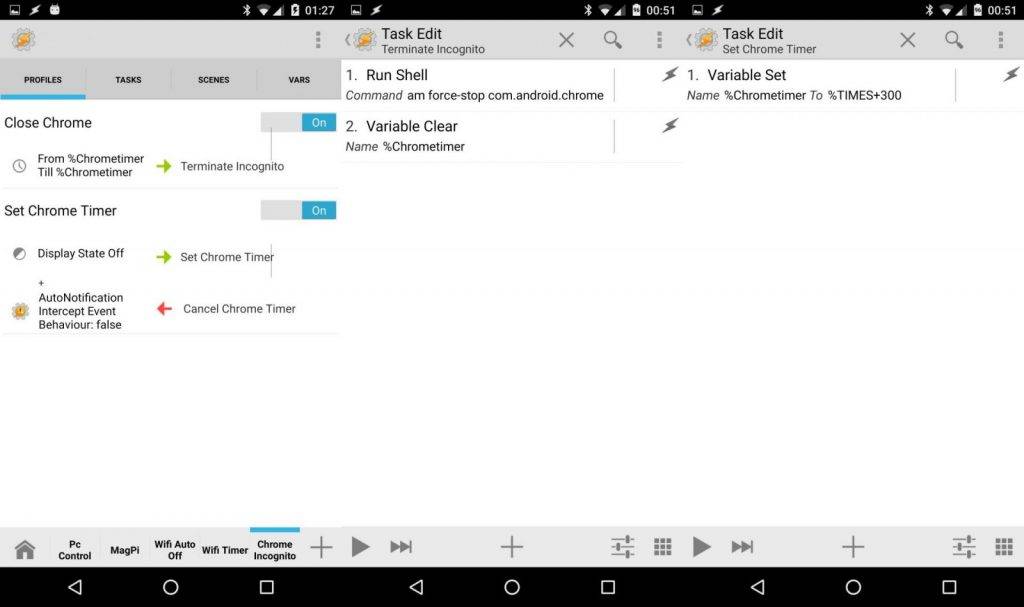 We can think of Tasker in five basic elements – Tasks, Actions, Profiles, Scenes, and Variables. This is the easiest way we can do it. A Task is basically a list of actions. An Action is one step that needs to be completed, such as turning on your WiFi, toggling a setting, or running an app. Once actions are lined up as tasks, you can now automate tasks to run at specific times, places, or situations using Profiles. Profiles can be triggered by contexts such as time or sensor data (connectivity, location, etc). Scenes can display content, controls, or more settings where you can further interact with your profiles. And you can create and store Variables for use in tasks, profiles, and scenes.

Not the easiest of things to learn, but once you get the hang of it, it will be one of the best things you’ve ever done on an Android device.

Creating and automating a simple action

Say for example, you have an important meeting that’s very regular in its schedule – like every Monday morning from 9:00 AM to 10:00 AM. You recently installed Tasker and you want your phone to automatically go to silent mode during this time, and go back to regular sound notifications after the meeting. This you can do by setting up two tasks and a profile.

Step 1: Create a task that puts your phone into Silent Mode. You can even turn off data and incoming email with this if you choose to.

Step 2: Create a task that exits out of Silent Mode to your regular audio or vibrate on notifications.

Step 3: Create a Tasker profile for these tasks. You will be asked to provide contexts – think of them as the IF in programming’s IF/THEN variables – IF is the context, THEN is the task. You will for two contexts the time and the day of the week. So you can set the time for the “enter silent mode” task at 0900 and the “exit silent mode” at 1030, and only do this on Mondays.

There! You now have a basic Tasker profile for your meeting. Most profiles will be in this format, expanded to what tasks you want to do and what contexts you hang these tasks on.

Of course, Tasker is so much more than an automated “Do Not Disturb” app. People have done many complicated and convoluted automations with it that do very specific things, especially with the help of the plethora of plugins that have been developed for Tasker. We will highlight a couple, because there are so many of these out there. First up is João Dias’s many plugins – like AutoVoice, AutoCast, and AutoNotification. Then there’s the Tasker App Factory.

The Tasker App Factory is a wonderful tool for anyone with Tasker, because it turns tasks into standalone apps which can be distributed and installed even on devices without Tasker. So you can proliferate your Tasker addiction to any number of Android devices you may have. And did we mention Tasker App Factory is free? It is.

Now João Dias – better known as “joaomgcd” to those who use his work – has created so many plugins for Tasker, it’s almost ridiculous. Any task you can automate with Tasker, he probably has a plugin for that. We’ve covered AutoVoice before, and AutoCast is a plugin specifically for Chromecast processes. Joao makes his plugins have a trial run before actually paying for it, and the support and updates he provides for them is totally worth the price of entry.

After all of these, it has to somehow hit you that Tasker is very much a trial and error type of app. As such, you will be required to do your own amount of research on forums and such. A lot of things in Tasker are like this, and you just have to work through it until you get it completely perfect for your own context. It might seem big and complicated at first – and it somehow really is – but at some point in time you get it working, it you realize that you’ve actually conquered the learning curve. It’s pretty simple from that point onwards.