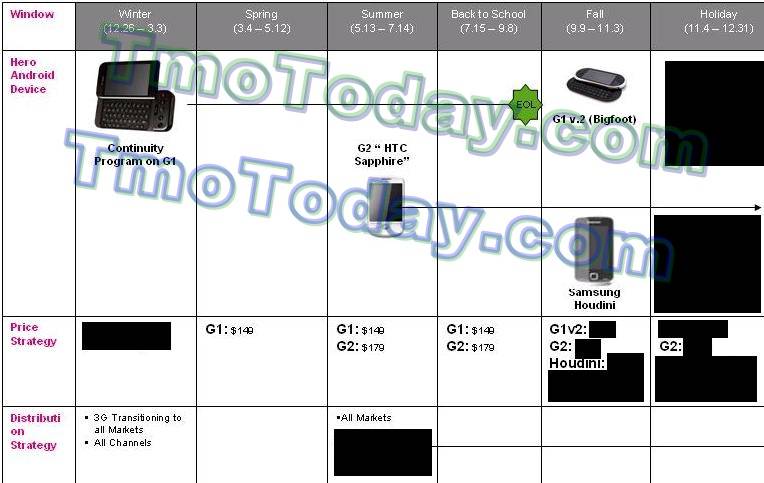 T-Mobile USA’s Android roadmap has leaked, and it brings with it a number of as-yet unannounced devices that include the Samsung Houdini and the G1 v.2 “Bigfoot”.  According to the roadmap, the G2 – aka the HTC Magic, now believed to be called the T-Mobile myTouch 3G – will launch this Summer, a reasonable prediction, priced at $179.

The T-Mobile G1, meanwhile, will reach end-of-life stage at the end of the “back to school” period in early September.  It will be replaced by a device listed as the G1 v.2 “Bigfoot”, which the graphic would suggest is a slide-out QWERTY device similar to the Helio Ocean 2.

Meanwhile, a Samsung handset – the Houdini – will reach the carrier.  There’s no telling what connection the Houdini has with the Samsung I7500; it could be a different device, or the image could be a mockup created in advance of real I7500 graphics being available (the same could be said for the G1 v.2).  Pricing for the latter two handsets has been blanked out, unfortunately.