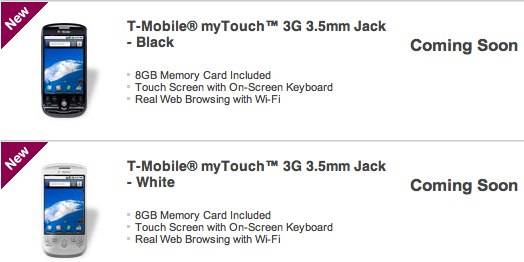 As expected, T-Mobile have officially confirmed the new myTouch 3G models with 3.5mm headphone jacks.  The handset – which will be available in both black and white – is only listed as “coming soon” and lacks any sort of pricing.

It also gets a smaller memory card than the myTouch 3G Fender Edition; at 8GB it’s half the size.  That certainly seems to indicate that T-Mobile will be making this a more affordable device than the $179.99 Fender limited edition.  Otherwise all the specifications are seemingly the same as the first-gen T-Mobile myTouch 3G.

Update: T-Mobile USA have been in touch to confirm that the new myTouch 3G is available from today, priced at $149.99 with a new agreement.  As well as the 3.5mm headphone socket it now has 288MB of memory and Swype preinstalled.