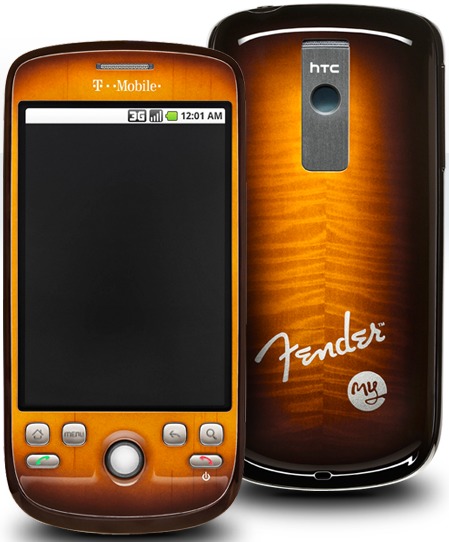 T-Mobile have announced the myTouch 3G Fender Limited Edition, which is basically a myTouch 3G with a nice-looking guitar sunburst-finish casing, designed in partnership with Fender. This device will run Android 1.6, but T-Mobile promised to update it to the latest version of Android (2.1) by Spring of this year.

The T-Mobile myTouch 3G Fender Limited Edition will set you back $179.99 with a 2 year service agreement. The Android-powered handset is expected nationwide at select T-Mobile retail stores and online at www.T-MobilemyTouch.com by January 20th while quantities last, so you better hurry if you want to have this slick version of the T-Mobile myTouch 3G.

The Fender Limited Edition comes equipped with a 16GB microSD card, a 3.5mm headset jack and an enhanced music player developed by HTC. This new handset will ship with preloaded music from Eric Clapton (Layla, My Father’s Eyes, Rock ‘N’ Roll Heart, and Wonderful Tonight), Avril Lavigne, Brad Paisley and Wyclef Jean. DoubleTwist will be included on the device so you can easily sync your music, images, and videos to and from your PC or Mac. For more info read the press release below, and don’t forget to check the video at the end.

As part of the myTouch 3G marketing campaign, which has featured a variety of iconic artists including comedians, musicians and sports figures, Clapton’s commercial will debut on national TV on January 20, supporting the availability of the device nationwide in select T-Mobile retail stores and online at http://www.t-mobilemytouch.com. In the ad, Clapton will showcase a personalized myTouch 3G Fender Limited Edition.

The Fender Limited Edition puts a rock-and-roll spin on the original T-Mobile myTouch 3G with Google™, offering a fresh design and enhanced features to create a unique mobile music experience. The device will ship with preloaded Clapton classics including “Layla,” “My Father’s Eyes,” “Rock ‘N’ Roll Heart,” and “Wonderful Tonight,” and T-Mobile is a proud supporter of Clapton’s Crossroads Guitar Festival.

Designed in partnership with Fender, the new limited edition myTouch has a Fender guitar sunburst-finish inspired design. The Fender Limited Edition comes equipped with an array of features for an enhanced music experience — a 16GB microSD card to house thousands of songs/videos, a 3.5mm headset jack for headphones and an enhanced music player. The music player, developed by HTC, offers an intuitive user interface that allows for toggling between different views or for changing a song or album by simply touching the album art. It also allows customers to create ringtones from songs that are playing.

“In a modern culture that forms an essential bond between music, mobile devices and one’s individual lifestyle, Fender is very proud to partner with T-Mobile on the exclusive new T-Mobile myTouch 3G Fender Limited Edition,” said Mark Van Vleet, senior vice president of Business Affairs, Fender Musical Instruments. “This is an exciting and innovative way to connect people to their passion for great music wherever they go, and we are thrilled to share this news with our customers and fans.”

“The myTouch 3G, which runs on Android, gives us an open, highly customizable platform to create truly unique experiences that go beyond what’s possible on proprietary platforms,” said Andrew Sherrard, vice president of product development, T-Mobile USA. “The new limited edition myTouch is a perfect example of this innovation and personalization, and we are excited to bring our customers this special limited edition, feature-rich, music-inspired device.”

With the myTouch 3G Fender Limited Edition, T-Mobile is introducing a customized multimedia sync solution in partnership with Silicon Valley startup doubleTwist™, allowing customers to easily take advantage of the phone’s advanced media features. doubleTwist is a free software application that enables users to easily manage and sync their music, videos and images from a Windows®-based PC or Mac directly to their mobile device. doubleTwist automatically finds all of the music already on the computer and allows customers to import their iTunes playlists, providing full media management functionality. An exclusive T-Mobile version of the software will be pre-loaded on the new limited edition so customers can simply connect their device to their computer for a seamless installation experience. The software offers a sleek, intuitive interface for syncing and managing music and other media. T-Mobile also will offer the customized version of the software to customers using other T-Mobile Android devices.

The new limited edition myTouch also offers the popular features and same great technology as the original T-Mobile myTouch, including a highly personalized experience, with home screen customization and more than 16,000 applications available from Android Market. The device also offers customers one-touch access to the Google™ mobile services that millions use every day including Google Search by voice, Google Maps™ with Street View, YouTube® and Picasa®. The Fender Limited Edition, which runs Android 1.6, is expected to be updated to Android 2.1 this spring.

The T-Mobile myTouch 3G Fender Limited Edition is expected to be available starting January 20 nationwide at select T-Mobile retail stores and online at www.T-MobilemyTouch.com, while quantities last. The device will cost $179.99 (plus taxes and fees) with a new two-year service agreement and qualifying voice and data plan. See www.t-mobile.com for details.