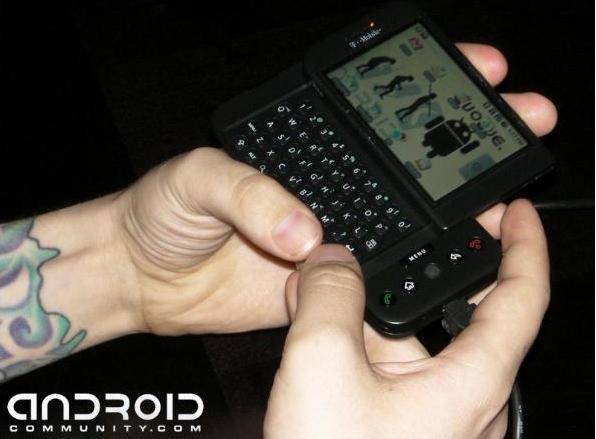 Reviews of the first Android-powered handset the T-Mobile G1 have surfaced and many people are finding the G1 less than fantastic. Many have gone on to say that it did not meet expectations set by all the hype. One common issue that was reported was the GPS not working. A large proportion of devices were unable to locate users’ positions in Google maps.

Not everyone was pleased with the design of the G1. The lack of a standard headphone jack was picked out by PCWorld, they also went on to say that the keyboard’s keys were a bit too flat. Tech Yahoo says the keyboard makes the G1 feel like a grown up verion of the SideKick. Lifehacker pointed out that this phone may be a little hard to get use to for customers coming from an iPhone, the lack of a multi-touch screen simply can not be ignored in this case. The phone handles very well in the palm of your hand, it feel like more of a phone than the iPhone says Zdnet. It’s a perception that often depends on the user, though; Gigaom argues that it feels bulky in the hand.

Phone News and The Boy Genius Report agreed that the instant messaging client was anything but what is expected from a smart phone. The application was unstable, often signing you out multiple times in a single session, and failing more reconnection attempts. It is perhaps no surprise that the only IM client that uses data to send an instant message was Google Talk, others use a text-message based method. The G1 does not support Microsoft Exchange out of the box, but the Chicago Tribune expects that to change as it did with the iPhone. The alternative, Outlook Web Access, is reported by MSNBC as being very pleasant and relatively fast.

The G1’s battery leaves a lot to be desired. CrunchGear reported that the battery life, on average, was even worse than that of the iPhone. With the phone beign built around applications and the Android Market this is really bad news for power-users. In tests done by All Things Digital the G1 was reported to score just under the claimed five hours of talk time. MobileBurn reports that even though they like the user interface, the G1 really has no big deal breakers. Engadget had a few issue with the long-press feature, the G1 sometimes confused a long press with the scrolling feature.  This may come as a disappointment to some with high expectations that the G1 will the the iPhone killer. The touch screen is “wonderfully quick and responsive” though, reports PCMag.

Cnet found the camera to be good, even though it lacks basic camera settings (much like the iPhone) such as white balance. It appears inevitable to avoid being noted as clearly the first Android out there, PhoneScoop was one of many that mentioned the G1 is clearly the first of the Android Platform. Gizmodo went on to say “The G1 phone and the Android operating system are not finished products”, while PhoneDog reported that, despite having a list of complaints a mile long, they are overshadowed by how fun the Android user experience is.

The G1 from our experience was very quick, responsive and easy to use. Unlike the information reported by others, the main issues for us were the very short battery life and no way to kill background processes.  The battery needed to be charged sometimes 3 or 4 times a day because there was always so much going on in the background. Despite the few drawbacks we are still really excited about the G1. I have yet to see a phone other than the G1 come close to the iPhone in comparison.

With early user reviews and now our official Android Community review how do you guys feel about pre-ordering the G1? Anyone calling in to cancel or are you determined to be the first one on your block sporting the new G1? Be sure to let us know. And for those of you who will be getting your G1 very soon, don’t forget to post pictures of yourself with it for us to see.