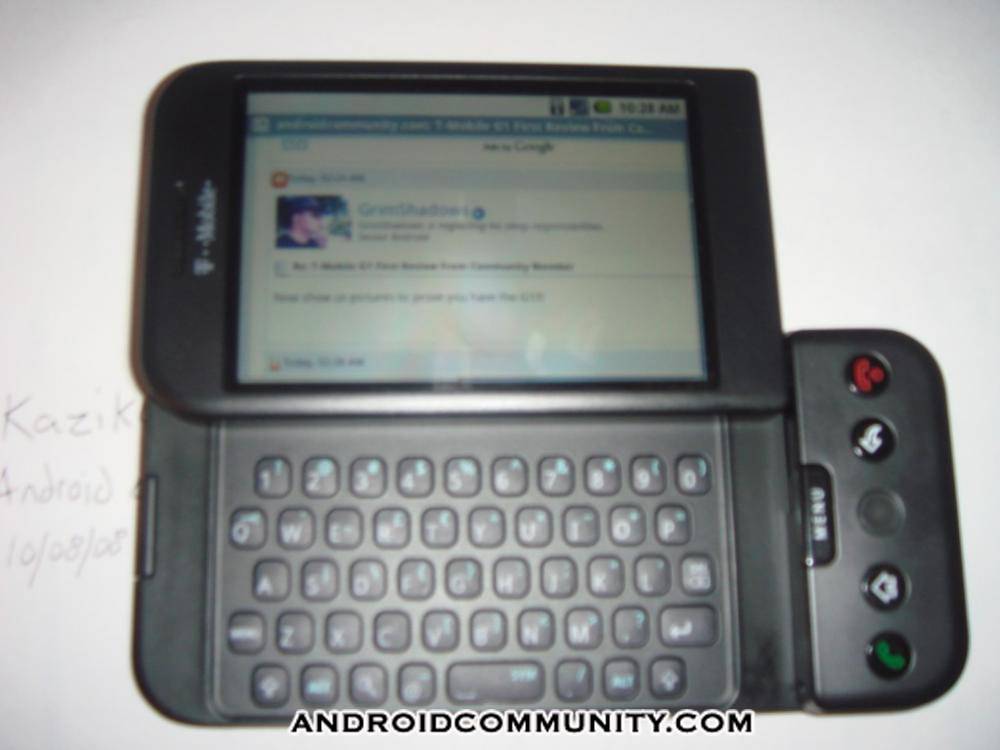 Android Community has done it again, this time we bring you an exclusive first time user review of T-Mobile’s G1. Forum member kaziko has given us a sneak peak at T-Mobile’s first device to run Google’s Android operating system. He put together a nice Q&A as well as providing us with a pros and cons list. The more we hear about the G1 the more anticipation builds, as we all wait for the 22nd to get our hands on this gem.

This device is very similar to the SideKick, Kaziko went on to say “Its a sidekick on massive steroids … If it had a box on the left side it would feel exactly like a Sidekick”. This is good news for a lot of the current Sidekick users who are looking for a long awaited upgrade to a device that sees very little change. This device has great call quality and a relatively loud speaker in comparison to other HTC devices. The G1 comes pre-loaded with a smooth running, easy to use instant messaging client that supports Google Talk, AIM, ICQ and MSN out of the box.

With all phones there is a bit of a downside to them, and in Kaiziko’s words “[the] phone does not run as smoothly as you would think”. Some of the applications “stutter” as they start up and from time to time the device must be restarted in order to run smoothly. Thankfully these drawbacks can ultimately be fixed with firmware and software upgrades. The battery charger makes the bottom of the device very hot and is in an awkward location for text messaging while it is charging.

kaziko answered questions that Android Community forum members have about the G1:

Q. Any word on saving the apps from the market on the microSD card?
A. Not even sure where the market apps are stored at this point in time.

Q. Does the G1 have vibrate then ring?
A. The only option I see is vibrate on/vibrate off.

Q. I have a Sidekick 2008 right now, could I use the same microSD card that is in my Sidekick 08 for the G1?
A. Yes you can use your microSD card up to 8GB without having to reformat.

Q. Is there any word about a third party applications using AIM, ICQ, MSN?
A. There is a program pre-installed that handles all instant messaging (Google Talk, AIM, ICQ, MSN).

Q. How are IM app buddy lists structured? Are all buddies (GTalk, AIM, Y!M, MSN) on one list, or are they separate screens? And are groups utilized on the buddy lists if you are using them in AIM, etc?
A. They are not structured like they should be for sure. Each messaging program has its own group and your personal groups are broken down inside the specific clients.

Q. Do the buttons on the chin light up like the UK version?
A. I’m not exactly sure what you mean by the buttons by the chin, but the visible buttons do light up.

Q. How is the responsiveness of the touch screen?
A. Ever played with an iPhone? If so, it’s rather responsive, anybody who’s owned an HTC device knows how aggravating the touchscreens can be. HTC pulled a fast one and really made the TS [on the G1] extremely usable with just the slight “touch” of a finger.

Q. If you lock the phone, does sliding [the screen] up automatically unlock it?
A. The only form of lock I’ve used is pressing the power button to blank the screen and that pretty much locks the device, opening the keyboard does not turn the screen back on. i will try to pattern lock tonight and get back with a better answer on this.

Q. Is there any kind of headphone adapter in the box?
A. No, the G1 comes in box with a stereo headset with inline volume control and answer/end/command button, a G1 branded microfiber slipper protective case, travel charger, USB cable and a user manual/getting started guide. This is what was in my G1, which is a pre-release model and might be different than the one actually released.

Q. Is the screen made of glass (like the iPhone) or plastic?
A. I’m not sure 100% about this but I think it’s glass, plastic screens don’t seem to have the sensitivity like glass screens do, and this runs perfectly so I’m assuming glass but I will get clarification on this matter.

I want to thank Android Community member Kaziko for giving us the first user review of the G1. He has really gone out of the way to give us an exclusive inside look at the device. We would be nothing without our members, support from users like him are what make us what we are.

Disclaimer: The views / opinions expressed in this article are solely of forum member kaziko, and does not reflect that of Android Community.