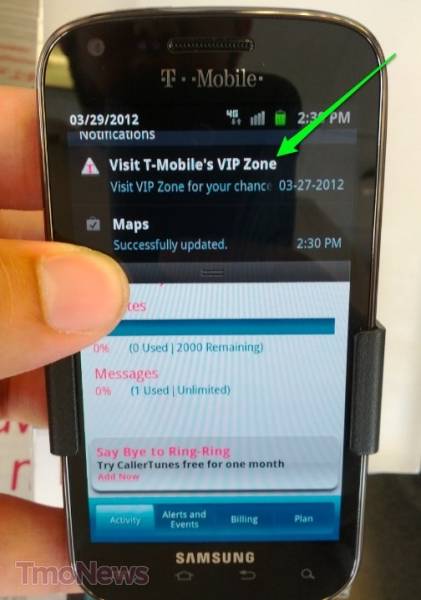 Here we go again: a mobile carrier is using Android’s notification system to enrich its advertising options, and customers aren’t happy. But this time it isn’t some regional carrier on the other side of the world, it’s good ol’ T-Mobile, champion of urban penny pinchers and (thanks to the Google G1) a patron saint of the Church of Android. TmoNews reports that a large number of customers have taken to company and independent forums to protest the annoying and invasive ads for magenta services like the T-Mobile VIP Zone.

The ads seems to be coming in after an update to the T-Mobile My Account app, a managing service that has smartphone counterparts on most carriers around the world. Previously the ads were limited to the UI of the app itself – something that didn’t really annoy most people, as it’s the kind of pervasive advertising that’s sadly typical with modern tech. But with ads showing up in the notification bar, where Android users expect to find more pertinent information like missed calls and emails, T-Mobile customers are understandably ticked. Many have called for either an opt-out option or the ability to uninstall the app completely, which is not default on most stock phones.

This isn’t the first time that we’ve seen ads pop up in the notification area – download a few shady and “free” apps from the Google Play Store and you’re sure to see some eventually. And it’s not like T-Mobile and other carriers don’t have some invasive advertising already; count yourself lucky if you don’t get one text message a month telling you how to add a line or re-up your contract. And since T-Mobile owns the bandwidth delivering the ads and develops the app and at least part of the phone service, they’re well within their rights to deliver ads however they like. Even so, this is understandably upsetting for paying customers. T-Mo, how’s about you reverse this unfortunate marketing tactic, unless you want the number of rooted users on your network to jump really quickly.