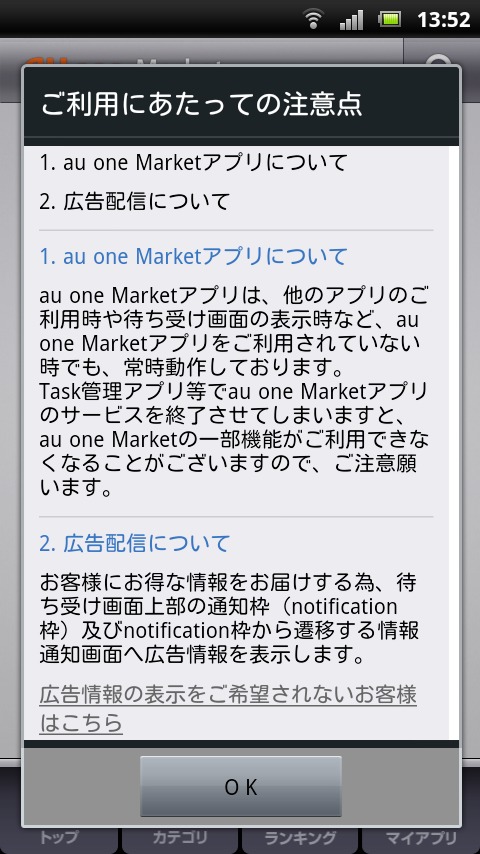 Raise your hand if you like ads. Anyone? Advertising is an unfortunately necessary part of modern life (and you can take that statement to the bank, since almost the entire livelihood of this humble blogger depends upon it) but sometimes the intrusive nature of new advertising methods sticks in the craw of consumers. Such is the case with Japanese wireless provider KDDI’s latest attempt at subtle marketing: they’ve begun pushing paid ads to users’ Android phones via the notification system. Advertising for apps in an alternative market started showing up on phones today, and Asiajin spotted users venting their frustrations on Twitter.

The culprit seems to be the Au One Market, one of many alternatives to the official Android Market that’s available on Asian smartphones which have not received Google’s certification. A recent update to the Au One Market included the ads for contained apps, which are pushed to the notification bar in the same manner as an email or text. (The image above is an ad for a weight loss app.) Naturally, users are somewhat upset, especially since there’s no way to remove the software from their phones  without voiding the warranty. At the time of writing, KDDI has not responded to the complaints of its customers.

At the best of times, using free Android apps is a compromise between advertising and functionality. The popular wisdom is that free apps are subsidized with ads – and indeed, a few are cheeky enough to slip them into the notification bar via the AirPush ad system – and paid apps are free of advertising. But to build un-ignorable apps into the framework of a service that most would consider essential for a modern smartphone is beyond the pale. The Au One Market does have a method for removing the ads, but it’s an opt-out option, and is built into the updated EULA in such a way that it’s far from obvious to its customers: it’s the greyed-out link just above the large “OK” button in the screenshot below. 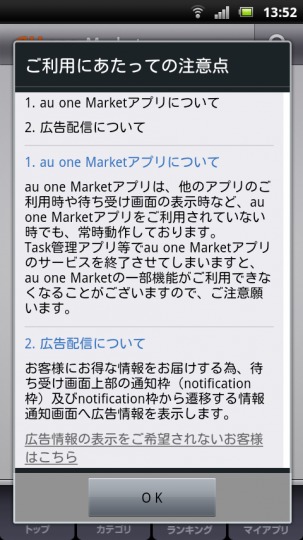 Advertising isn’t fun, but it’s necessary. However, this level of intrusive and annoying ads are uncalled for, and more than a little insulting. We recommend that other carriers and developers around the world learn from KDDI and Au One Market, which have generously provided an excellent example on how to anger and alienate paying customers.