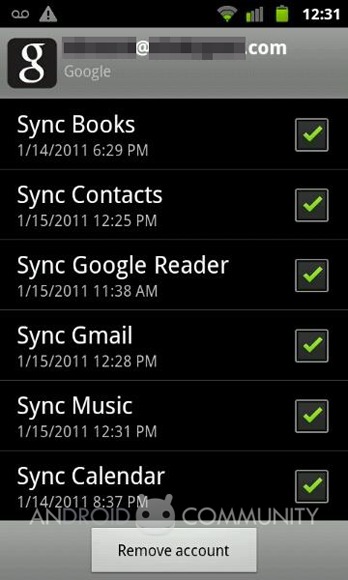 More specifically, the following option appears when you’ve got the [leaked] Honeycomb music player installed on your Android device running the current build of Android 2.3 Gingerbread. If you’d like to see how to do such a thing, head over to our Android Honeycomb Music Player: Full Guide [Early Leak] post and get yourself educated. Then come back here and get super pumped up because we’ve found a bit of an excellent option that appears when you’ve got the Honeycomb music player installed. Sync Music – but from where?

That, my friends, is the question.

As with the supposed (and seeming now to be MORE than just supposed) screenshot of an Android 2.3.x build with a matching music player installed with a similar option (see image below), we took a peek in our options and found -what’s that -ta-dah! There it was an option to sync Music, right aside options to sync Books, Contacts, Google Reader, Gmail, and Calendar. What does this mean for the future of Android? Clouds, music stores, some other magical kind of over-air connections to libraries of tunes. Let your heart and your mind run wild! Take a peek over at our Syncing and Streaming: Will Android 2.4/3.0 Bring Your Whole Music Library to Any Device [Or a Music Store?] post for more insight.

OR head to the forums to hash it out in the STREETS. ALSO note: the image below depicts a screenshot of a supposed Android 2.3.x build displaying a Sync Music option on the left, and a shot from inside the leaked Honeycomb music player showing an option to Stream Music on the right. 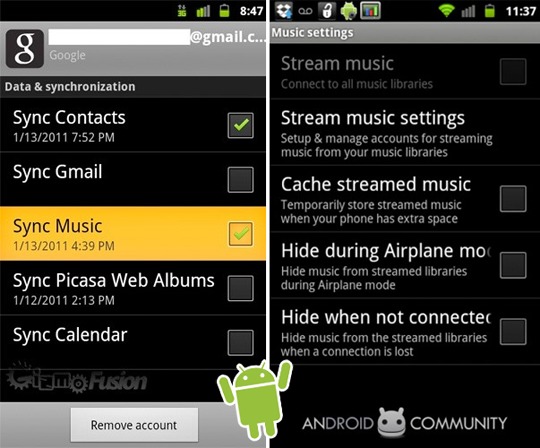