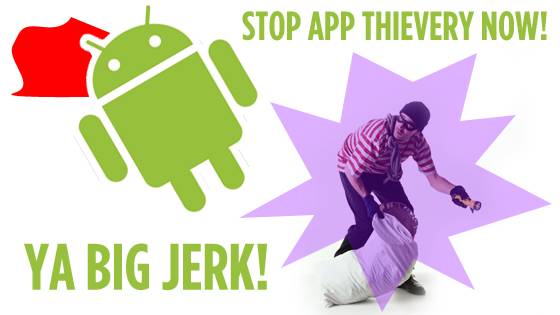 If you’ll remember a few days ago we had (and still have, of course,) a big fat post by the name of “Total Jerk Developer Steals Beta Game He Was Supposed to be Testing, Publishes to Android Market.” Kind of a mouthful, yes? Well it turns out that the guy guilty of such a crime has a mouth full of more than just one stolen game – he’s got a whole batch. This guy (or guys, or gals, whatever it might be) goes by the name DavinciDevelopers and is stealing APKs for apps left and right, files that are supposed to be testers for developers, publishing them to the Android Marketplace as his own. This is terrible in more ways than one, and we’ve got to stop him.

I don’t mean get up and bust open your rifle barrel, grabbing a sack of bullets and lobbing some grenades at the door as you exit on your way to his house, (especially since we don’t know where he lives,) I mean we’ve got to be conscious of what’s going on and whip up some avoidance solutions so we can stop the thievery and publishing of people’s hard work and loving efforts.

NOTE: Before we go any further, I would like to mention the irony in the fact that while many of the people (including myself) who would find this situation totally offensive are yelling and screaming about it, we’ve got our torrent engines running full blast stealing new albums and all sorts of Photoshops. How different today?

Now, for what’s happening, first. When you put the APK of your game on the internet, it’s going to be downloaded. It’s out there, it’s in the machine. Although you can sign your APK, your signature is not checked when you upload software to Google, and your signature can be easily deleted or changed. The title of your app can be changed, but the APK name and icon are unchangeable (to our knowledge.) You can save yourself a lot of trouble by not uploading your APK at all anywhere until it’s ready to send to Google, but that, in our opinion, is just like staying in your house 24 hours a day to make sure you never get robbed.

The Problem
Above all else, ironically, is not the problem of DavinciDevelopers profiting off of your work. That sucks, but you can still eventually prove to Google that it’s your game and have his taken down (if you’re lucky, of course.) The real problem is the name. Once DavinciDevelopers uploads your app, your pak name is locked. Why? Because no 2 apps in the Android Market can have the same name. Once he’s uploaded your work and your app, with bugs in it more than likely, is released under your chosen name, you’ll end up having to either change both your app’s name and possibly the name of your company, or face ruin at the hands of people who’ve downloaded his crappy Beta version and are now mad at you.

The Solution
There are three things you can do, two of which we recommend. The first (A.) of these three is to never upload your APK to the internet unless it’s straight to Google for the Android Marketplace. We don’t recommend this because the open community should be here to help one another with testing apps, having fun being trusting of one another, and in general growing together. If you can’t trust, developing for Android is not quite as fun.

B. You can put your app on the market place first. If your app is still in development, you have the option of uploading it as a “draft” so that while it isn’t visible on the market, the name will be locked. Positivity!

C. You can hunt down the betrayer with us by keeping on top of his account, making sure that every app he uploads is legit, reporting to the forums here and over at XDA with the names of the apps and links and such so everyone can know asap if it’s been stolen or if it’s actually legit. At this point, chances are you’ll have found another stolen product. Eventually hopefully Google will ban DavinciDevelopers from uploading and profiting from any apps in the future.

To find DavinciDevelopers, search in the Android Marketplace for any of the following: Bleach Ichigo Theme, Apple Theme HD, Snoopy Christmas HD, Zuma’s Revenge HD, Best Zodiac Sign, HD Android Themes, The Beatles Theme, Android HD Theme, NBA Practice, Zenonia 2 HD, or xbox4droid – a tiny sampling of his crappy wares. He has (or had) a webpage here: http://davincidevelopers.weebly.com/, but since it’s down, he may be in hiding for the moment.

To see an extended list of the apps that he’s stolen and published on his own, take a peek at the XDA thread relating to this situation. Let us or the folks in that thread know if you happen upon any trouble or updates on DavinciDevelopers. Thanks for your help, Community!