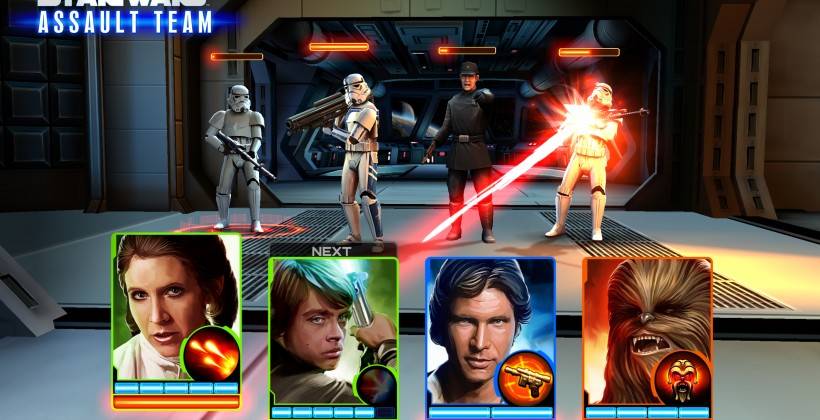 Disney began teasing the Star Wars: Assault Team game earlier in the year. At the time we were told this would be a turn-based card combat game and that it could be expected during the spring. Well, a quick check of the Play Store shows the game has finally arrived.

The game is free, with in-app purchases available. Pricing aside, players will be assembling teams and then heading into battle. This should all be a bit familiar to Star Wars fans and includes classic characters such as Luke Skywalker, Han Solo, Boba Fett and the Tusken Raiders.

Each of the characters have their own unique set of stats and abilities and as a result, they will all factor in to the overall strength of your team. Similar to the familiar character lineup, the battles and overall story line has been “inspired” by the Star Wars franchise — specifically by Episode IV: A New Hope and Episode V: The Empire Strikes Back.

We realize the card-based games are not for everyone, but in this case we suspect it may attract a bit more attention given it is Star Wars related. As the game is free there is no risk in downloading it to see, however those who are hesitant to do that may want to check the gameplay trailer, which is sitting below.

Star Wars: Assault Team can be found in the Google Play Store.