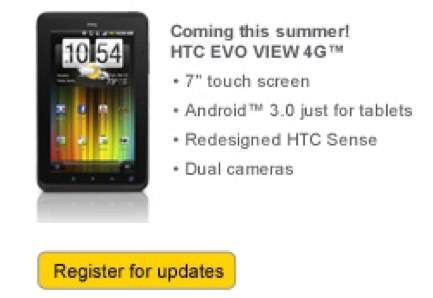 Sprint has apparently confirmed that its HTC EVO View 4G – the WiMAX-toting version of the HTC Flyer will indeed arrive running Android 3.0 Honeycomb out of the box. According to a mention on the Sprint “coming soon” page, the 7-inch slate has “Android 3.0 just for tablets.”

There’s also “redesigned HTC Sense”; HTC plans to skin Honeycomb just as it has done with Gingerbread, so the UI of the Flyer won’t resemble other Android 3.0 tablets like Motorola’s XOOM. That includes the rotating 3D carousel homescreen and of course modifications to suit the Flyer’s digital stylus.

Previous rumors had suggested that Google might be blocking Android 2.x to 3.x upgrades for tablets, but HTC has since re-confirmed that it intends to release an update to Honeycomb for those early releases of the Flyer which arrive with Gingerbread. That could be any time in Q2, though there has been talk of the first units dropping this month.