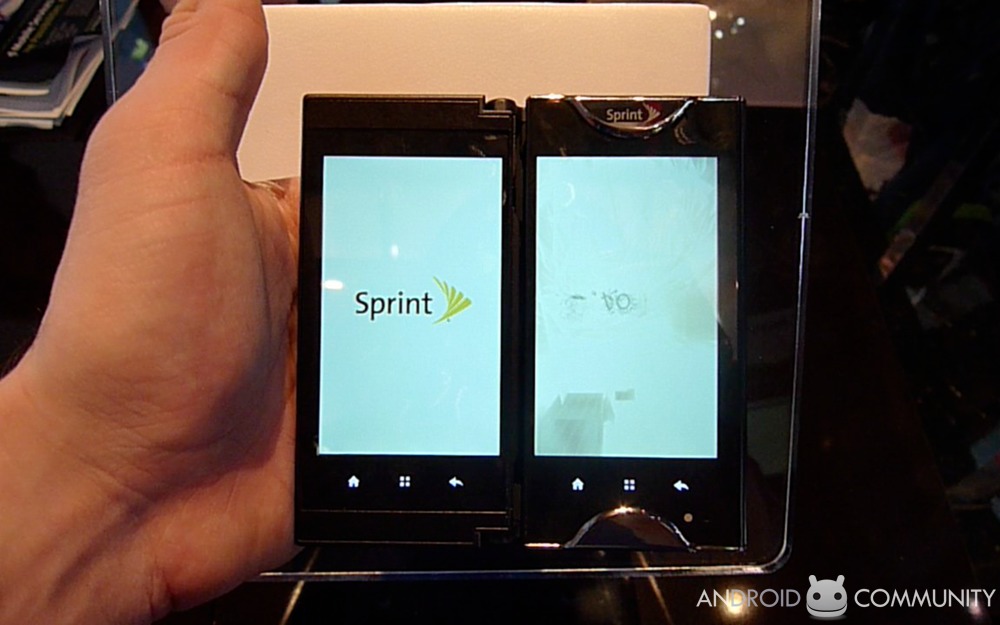 Whilst having another look at the Kyocera Echo at the Kyocera booth during CTIA 2011, we happened upon a unit that was switched off. Deciding to check to see if anything magical would happen if we switched the device on while filming, we hit the on button with our camera rolling. As it happens, it does indeed have a unique startup sequence, and now in this video you’re going to get to see it! Apologies in advance for the undeniably horribly terribly screen full of fingermarks! Take it as a sign that a lot of people are pumped up about this phone.

This phone has dual 3.5-inch WVGA displays with a pivot hinge that allows them four modes of view: single-screen mode, simul-task mode (two different apps running at the same time, one per screen,) optimized mode (such as a keyboard on one half and email on the other, and tablet mode, which of course gives you what they’re calling a 4.7-inch diagonal 800 x 960 pixel screen. But there’s a big line in the middle!

As for the everyday specifications, there’s a 5-megapixel camera on the back that can record with 720p HD video camcorder and a single flash, Android 2.2 Froyo inside, and a mobile hotspot with up to 5 connections to devices for some sweet 3G data speeds. It’s got a 1GHz Snapdragon processor, Bluetooth 2.1, Telenav GPS, Flash 10.1, and an extra battery included – so that you don’t have to go out and purchase a big fat battery to power this double dose of display.