Ok, so the DROID Turbo was recently announced by Verizon, making that a hat trick of flagship level phones for Motorola this year – including the new Moto X and the Google Nexus 6. The DROID branding is Motorola’s partnership with Verizon, and so there was very little hope for international markets to even get a sniff of the DROID Turbo, until today.

This morning, a resident of Sao Paolo Brazil posted pictures of what looked like a DROID Turbo, but without the Verizon branding (!!!). The device in the pictures has been branded the Moto Maxx, and it looks the real deal, complete with Motorola branding and product stickers where we could see the specs. The uploader captioned his pics “Testing the monster.” Lucky son of a gun. 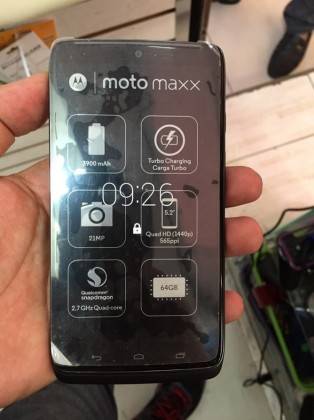 The pictures show clearly that this is not a Verizon clone model that was shipped to Brazil – the device has a totally different branding scheme, and the Motorola logo beside the Moto Maxx name gives it an air of legitimacy. The temporary screen protector also lists the specs – the Qualcomm Snapdragon processor, 5.2-inch QHD screen, 21MP camera, and the ginormous 3900mAh battery – all of which match the specs of the DROID Turbo.

This should give enough hope to those outside of the US to actually see what looks to be a twin of the DROID Turbo in the flesh. For a while there, we were actually worried that this has not even crossed the mind of Motorola. If the pictures are true, then Motorola just made us a bit happier this holiday season.