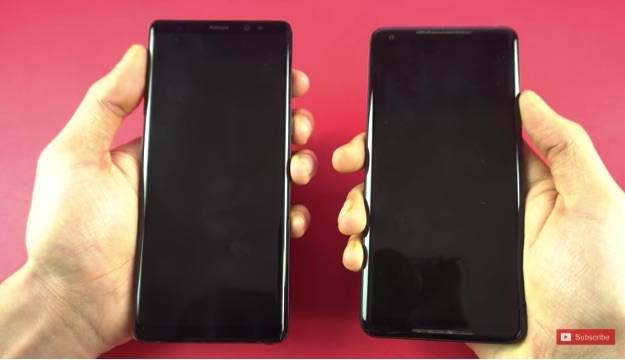 Premium Android flagship smartphones being pitted against each other is not an unusual occurrence. We’re actually interested to see more speed tests because they are more relevant and really show how every device performs in everyday use. After the OnePlus 5T VS Samsung Galaxy S8 Oreo, here’s a Speed Test comparing the Samsung Galaxy Note 8 and the Google Pixel 2 XL.

Both smartphones are connected to the same WiFi network and with apps closed in the background. Upon booting up the phones, you will notice they are both fast but the Pixel 2 XL’s opening was even snappier.

Moving on to the 3rd-party mobile apps, opening them shows the speed is almost the same on most apps from Instagram to Subway Surfers, Twitter, Snapchat, Spotify, Soundcloud, and PinOut. The Note 8 opens faster compared to the Pixel phone. Moving on to more games, opening Smash Hit is faster on the Pixel phone.

When it comes to RAM management, the speed test tells us the Galaxy Note 8 is the clear winner. The browser war seems to be over but loading is indeed faster. RAM management is impressive especially when most of the browsers on the Note 8 are found not to be reloading.