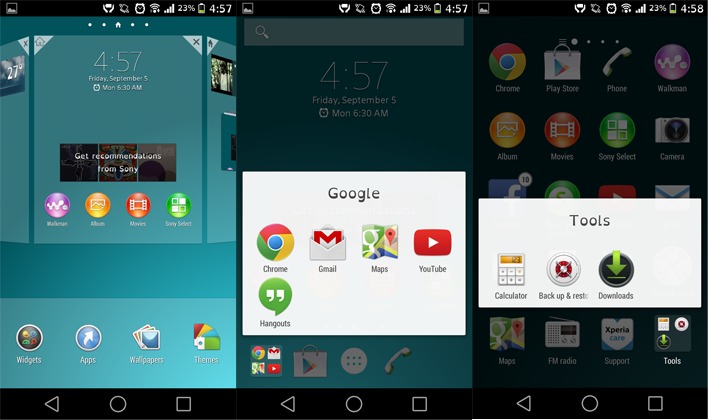 In the wake of Sony finally launching the Xperia Z3 at IFA 2014 (cue Xperia fan hysteria), we’re still trying to gather our collective Android consciousness, but the fellows over at XDA just will not rest. XDA contributor “Sahaab” has just released a port of the Xperia Z3’s home launcher for Android devices running on version 4.2 and up – even the non-Sony ones as well.

A system dump from the Xperia Z3 was made available yesterday, giving themers and tweakers lots of things to play with. This specific port makes the Xperia Z3’s new home launcher – including all the new widgets – available to Xperia and non-Xperia devices running Android 4.2 or newer. The port also doesn’t need root access, so it’s easier to apply in that sense.

Installing is a breeze – one can either push the app files to a device’s system or app directory, or just download the “.apk” installer for less hassle. Sahaab is reportedly trying to backport the new home launcher even further to Android 4.1 and 4.0 devices.

All said, the new home launcher from the Xperia Z3 is visibly nice – with widgets and icons and the general feel of the interface showing more of Android L’s “Material Design” – maybe in anticipation of the launch later this year. You can check out the official XDA thread of the port here.