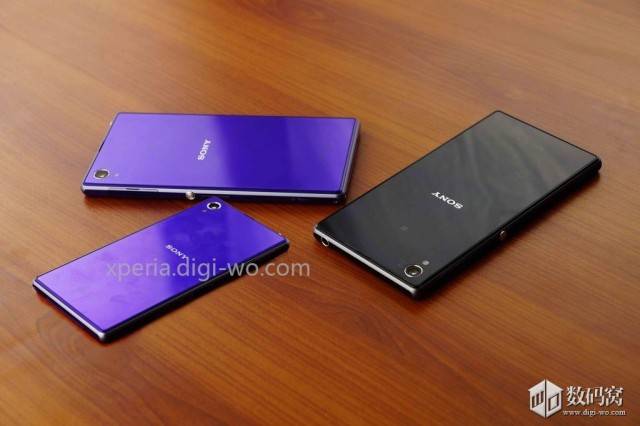 Sony announced the often rumored Honami smartphone during IFA. As many are likely familiar with, the Honami arrived as the Sony Xperia Z1 and while we have been able to put those rumors to rest with the official announcement, it looks like talk of the Xperia Z1 Mini are going to continue with some frequency. In fact, we saw the front panel leak yesterday and today we have what is said to be the Xperia Z1 Mini sitting side-by-side with the Xperia Z1.

This latest image is showing the Xperia Z1 Mini in purple and sitting side-by-side with the Xperia Z1 in purple and black. The image has come by way of the Chinese language digi-wo website and well, we are going to be a bit skeptical with this one. There isn’t enough to come out and call this an outright fake, but it does seem the leaks have progressed rather quickly.

Details of the Xperia Z1 Mini are showing a handset that will have specs similar to the non-Mini version. Basically, that is to say the Xperia Z1 Mini is expected to be powered by a Qualcomm Snapdragon 800 processor and still have the same 20.7 megapixel rear-facing camera. Other specs look to include 8GB of internal storage, 2GB of RAM and a 4.3-inch 720p display.

In comparison, the Xperia Z1 is sporting a 5-inch 1080p display and 16GB of internal storage. In keeping with details that should still be considered rumor, the latest chatter suggests that Sony will officially unveil the Xperia Z1 Mini during CES 2014. Basically, it looks like the Xperia Z1 rumors have been replaced with Xperia Z1 Mini rumors and we have at least a few months time before they will end.

While the Xperia Z1 Mini should arrive with a smaller display, it is expected to have the same exterior look and style. So with that, those curious about the Xperia Z1 Mini may also benefit from our earlier hands-on time with the recently announced Xperia Z1.