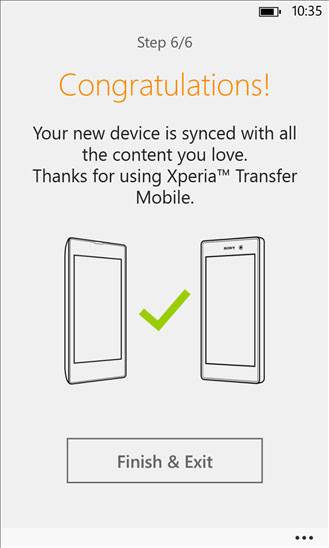 Sony has had a smartphone app for Android users on Google Play for a while now that makes it easy to transfer your data from an old smartphone to a new Xperia unit. That app is called Xperia Transfer and it was recently updated on Android for more speed. Sony has now put the app up on the Windows Phone Store in an effort to get people to migrate from Windows Phone to Xperia Android devices.

The app works on Windows Phone devices much the same way that it works with other devices. It will transfer contacts, photos, videos, music, calendar, Office documents, and other items from your old device to a new one.

The app is available as a free download right now on the Windows Phone Store. The app will work with Windows Phone devices running version 8 and 8.1.

The app is currently in version 1.0.0.0 and is 7MB in size. You do need a transfer cable to go with the app and how long the transfer takes will depend on how much data you are transferring.