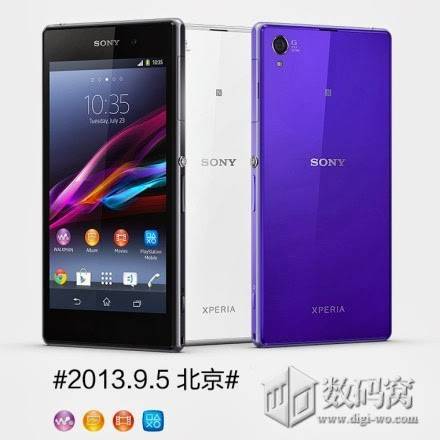 This sort of comes with little in terms of surprise at this point, but it looks like there has been some additional Honami related leaks. This time around we are seeing another image of the handset in a variety of colors. Nothing all that surprising given the color aspect has already been discussed, but as you can see below — there is now the white, black and purple models sitting side-by-side in one single image.

Of course, as you can see the focus is on the white and purple models as the black model is facing front. The image comes by way of the Chinese language digi-wo and as noted — we are still expecting Sony to offer the official announcement on September 5th. Sony has previously confirmed an event for the 5th, however they have yet to offer any specifics in terms of what they will be talking about.

Aside from this colorful image of the Honami, there has also been another part related image leak. This other comes by way of ETrade Supply and was discovered by the folks at nowhereelse.fr. Not much is revealed by these pics, however if you had been hoping to see some pictures of the bezel of the Honami you are in luck.

Otherwise, the talk of the Honami seems to be shifting towards a more proper handset name, the Sony Xperia i1. Perhaps more exciting as compared to the leaks — Sony has recently begun offering some teasers of their own. They recently posted an image on Twitter with the hashtag of #bestofSony. The image doesn’t offer much of a look, but we suppose that is what a teaser is supposed to do.

At present the latest leaked and rumors specs show a handset that will arrive sporting a 5-inch 1080p display, Qualcomm Snapdragon 800 processor and 20 megapixel rear-facing camera. There has been some debate on which version of Android the handset will launch with, but other specs look to include 2GB of RAM, 16GB of internal storage and a 3000 mAh battery. And remember, we will be live on-site in Berlin to bring the latest news from IFA.