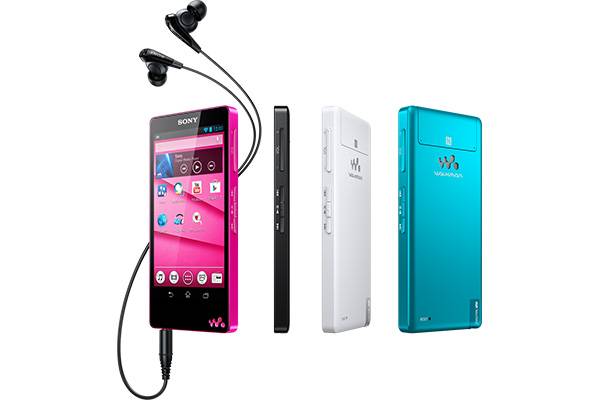 Sony has just announced a handful of new devices to add to its growing collection of Android-powered music players. The premium NW-ZX1 MP3 player and three colorful variants of the NW-F880 series will be joining the ranks of the Sony’s new breed of players that combine the audio quality that the Walkman brand is known for with the versatility of the Android platform.

The NW-F880 is a continuation of Sony’s former F series and comes in three flavors based on the storage size: the 16 GB NW-F885, the 32 GB NW-F886, and the 64 GB NW-F887. The devices boasts of an audio quality of 24 bit/192 kHz for lossless audio formats such as FLAC and WAV, higher than that of CD-quality audio. The NW-F880 series also sports hardware buttons on the side of the device for playback controls, making it easy to use tz device without even looking at the screen. The 32 GB member of the series was announced earlier during IFA in Berlin as the Sony Walkman F886.

The NW-ZX1, on the other hand, is quite a strange beast, marketed, and priced, to be a high-end device. It sports the same audio prowess as the F880 but, curiously, actually removes some features for the sake of better audio quality. The ZX1 does away with the FM radio and even digital noise cancellation to reduce the amount of possible audio interference. The device also has a bulge at the rear to house a larger capacitor and headphone amplifier. The NW-ZX1 comes with 128 GB of storage. Like the F880 series, the ZX1 also touts Sony’s S-Master HX digital amplifier that reduces distoration and noise on all frequency ranges, whether high or low. To best experience the audio quality offered by the ZX1, Sony doesn’t include free earphones in the package and instead recommends buyings one if its Hi-Res audio headsets separately.

All these new devices sport a 4.0-inch 480×854 screen touting Sony’s Triluminous display technology. The F880 runs on a dual core 1.0 GHz OMAP4 Cortex-A9 chip, while there is no mention of the ZX1’s processor. Both are running Android 4.1 Jelly Bean. They all support a variety of connectivity features such as WiFi, Bluetooth and NFC for easy pairing with speakers.

The NW-F880 will come in White, Black, Blue, and Vivid Pink color options, although the 64 GB variant only comes in Black and White. The 16 GB is priced at $274, the 32 GB at $304, and the 64 GB at $405. The NW-ZX1 comes in a silver color only and carries a price tag of $760. The new Android Walkman devices are set to launch in Japan on October 19 with no details of international availability.