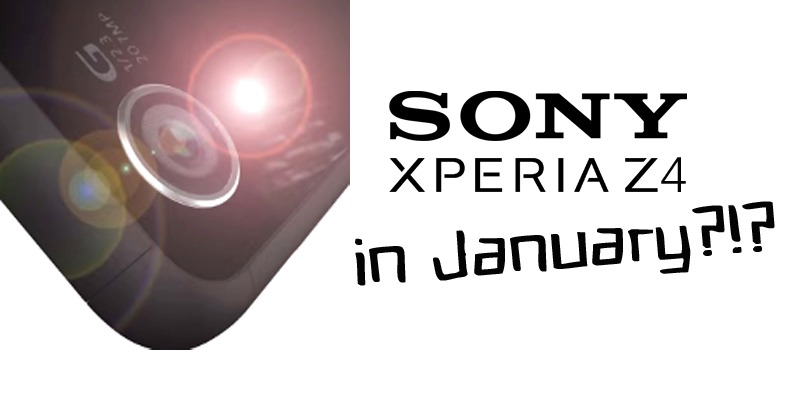 Crazy – that’s the word we have for it. We have no arguments whatsoever that the tech industry moves heck fast, but Sony is trying to redefine that statement as we are continuing to receive leaks that Sony will indeed be launching its next flagship phone, the Xperia Z4 this coming January in Las Vegas.

A lot of us are looking forward to CES 2015 – one of the biggest gadget trade shows on the face of this earth – but Sony seems to be giving us more reason to get excited. Phone Arena published a tip from one of its sources that the Japanese manufacturers are already lining up the launch of the Xperia Z4 just mere months after it released the Xperia Z3 (September 2014).

The source also says that the Xperia Z5 will be sporting a 5.4-inch TRILUMINOS display reportedly powered by a Snapdragon 805 processor – not the Snapdragon 810 that we all expected. Rumors also say that the Xperia Z4 will be backstopped by a ginormous amount of RAM – 4GB to be exact. What that will do to the pricing of the device, we still can’t say – but Sony has never back down on RAM before.

There are leaked pics – which all but confirm the 20.7 MP main camera. We hope it’s the new IMX230 sensor that Sony recently unveiled, as that will bring image plane detection AF technology, 192-point autofocus for blur-free snaps of fast-moving objects, and real-time HDR (wow).

Lastly, the source has news for the Xperia Z4 Ultra, which might be launched side-by-side the Xperia Z4 in Las Vegas (crazy, we tell you). The Ultra will purportedly have a 5.9-inch screen, the same Snapdragon 805 processor and 4GB RAM, but a lower 16MP main camera. The selling point of the Ultra is rumored to be a razor thin 5.7mm chassis.

Are you ready for the Xperia Z4? We ourselves can’t quite believe it yet, but we expect we’ll know for sure soon enough.