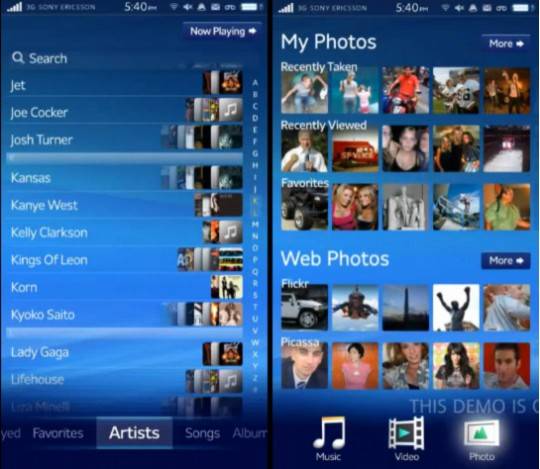 It would seem as if November is the Android month, with the new Motorola Droid coming to Verizon on November 6th. And the rumors pointing towards November 3rd to the date that Sony Ericsson will be launching a new Android device.

I have to say this, when I watched this video the first time, I couldn’t help to feel the anxiety of getting this Sony smartphone. And I’m willing to bet, that most of you will feel the same way. I don’t have anything against Android, but lets be honest, media playback on an Android phone just doesn’t cut it, until now it would seem.

Sony Ericsson’s new device is expected to be named either the Xperia X3 or X10. And this new UI demo focuses on Rachael’s new media playback interface, with far improved album management, photo browsing and video playback than any other Android phone, in my opinion. It also seems to borrowed from the Zune HD, check the homescreen, which has a layout very similar to the Zune HD’s QuickPlay menu.

Well, I won’t go into more details, just check the video below and judge for yourself. But I tell you this, when this New Sony device comes out, I will be tempted to either drop my current phone, or get the Sony and carry two smartphones with me all the time, although some people already do that, so I might end up doing just that.