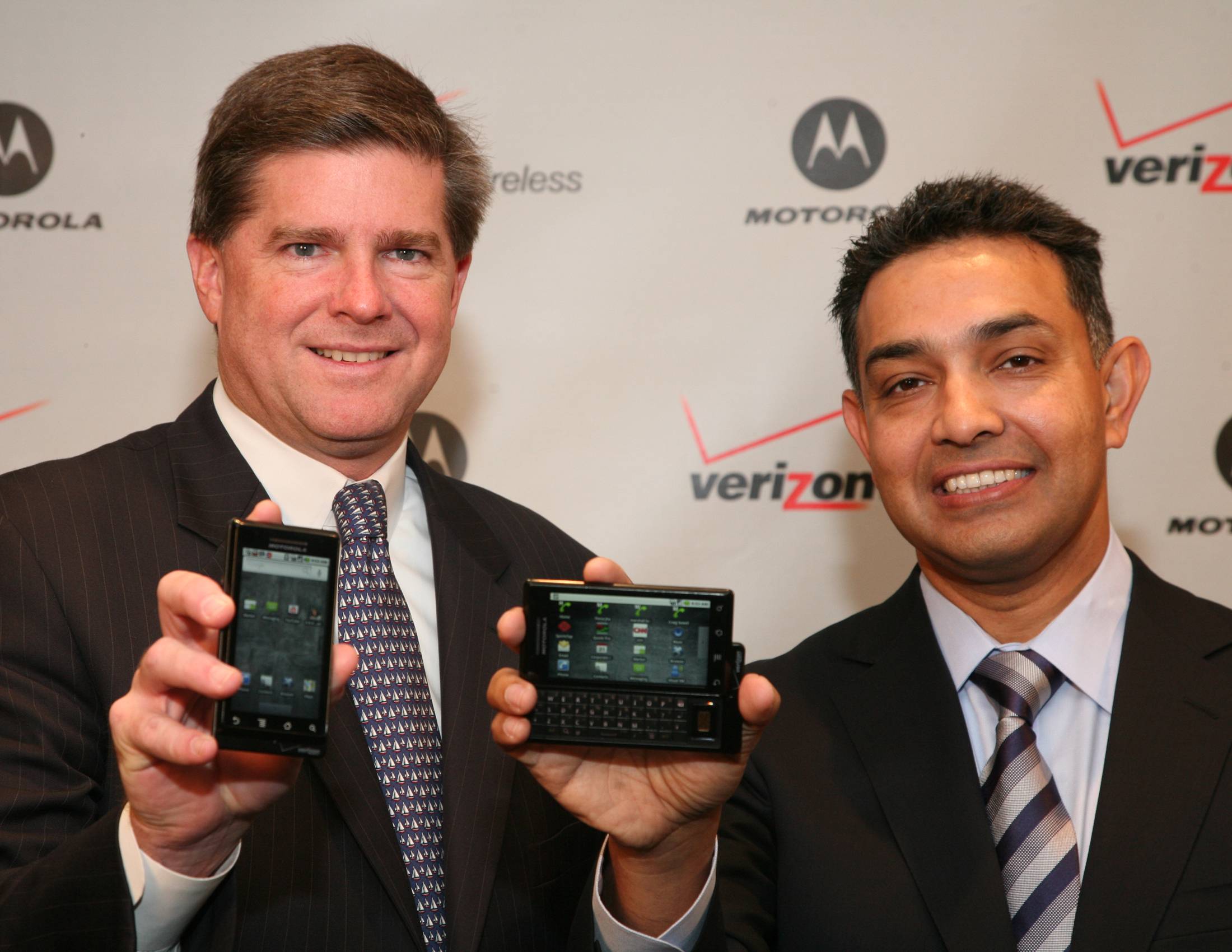 As expected, Verizon have outed their first Android smartphone, the Motorola DROID.  The Verizon DROID by Motorola will be the first device to arrive with Android 2.0, together with a 3.7-inch 854 x 480 capacitive touchscreen, slide-out QWERTY keyboard, 5-megapixel camera with autofocus and dual-LED flash, and OTA Amazon MP3 downloads.

Connectivity includes EVDO Rev.A, Bluetooth, WiFi and USB 2.0, and there’s also GPS along with Google’s new Google Maps Navigation Beta for free turn-by-turn directions.  All the usual Google apps are loaded, and there’s a 16GB microSD card in the box.

The Verizon DROID by Motorola will arrive on November 6th, priced at $199.99 after a mail-in rebate and assuming a new, two-year contract.  We’re meeting up with Verizon imminently, so expect hands-on video and photos very soon!

Verizon Wireless, the company with the nation’s largest wireless 3G broadband network, and Motorola, Inc. (NYSE: MOT), a pioneer in the mobile industry, today unveiled DROID by Motorola, the first smartphone powered by Android™ 2.0. DROID by Motorola features the brainpower and breakneck speed of a modern smartphone, designed to outperform where other smartphones fall short.

“This is an exciting announcement for Verizon Wireless, as the DROID by Motorola is the first device that we are bringing to market under our ground-breaking strategic partnership with Google,” said John Stratton, executive vice president and chief marketing officer for Verizon Wireless. “DROID by Motorola gives customers a lifestyle device with access to more than 12,000 applications that will help them stay in touch, up to date and entertained, using the best 3G network in the country.”

DROID by Motorola has a solid exterior, intelligent interior and is one of the thinnest full-QWERTY slider phones available. It is a no-fuss, high-tech, location-aware, voice-recognizing, over-the-air updating, multi-tasking machine – and it is available just in time for holiday wish lists.

With DROID by Motorola, you can:

Zip through the Web: Access the Internet at 3G speeds via the nation’s largest and most reliable 3G network or from any Wi-Fi hotspot. The multi-window HTML browser with a massive processor delivers the Web the way you expect.
See it all in cinema-style: View the Web, e-mail, Google Maps™, videos and more in widescreen on a brilliant 3.7” high-resolution screen. Boasting a width of 854 pixels to reduce the need for side-to-side panning and more than 400,000 pixels total, DROID has more than twice that of the leading competitor.
Run multiple applications at once: Customize your DROID with thousands of applications and hundreds of widgets available on Android Market™. Toggle back and forth between up to six applications at a time to juggle the universe and your apps.
Perform Google Search™ at the speed of sound: Simply tell DROID what you’re looking for using voice-activated search, and it will serve up Google search results based on your location. If you want more, simply type what you’re looking for into the search bar on the home screen and DROID will also search content on your phone, such as apps and contacts, and the Web.
Capture moments: Snap digital camera-quality photos with a 5 megapixel camera loaded with the works, such as a dual-LED flash, AutoFocus and image stabilization, or capture your friend’s antics in 16 million colors with DVD-quality video capture and playback. Store it all on the included 16 GB memory card, so you always have it on hand.
Multi-task like a master: Keep tabs on all your messages with integrated Gmail™ and Exchange e-mail pushed directly to you, but don’t let them get in your way. With the handy Android notification panel, go straight to the message or simply ignore it, and get back to the task at hand. And, a smart dictionary learns as you type and automatically includes your contacts.
Get where you need to go with Google Maps Navigation (Beta): DROID is the first device with Google Maps Navigation, providing turn-by-turn voice guidance as a free feature of Google Maps. It’s powered by Google and connected to the Internet. Use voice shortcuts and simply say “Navigate to [your destination],” and you’ll be on your way. See live traffic, use Street View or satellite imagery to view your route, and get access to the most recent maps and business information from Google Maps without ever needing to update your device.
Pre-loaded Applications and Enhancements to Google Mobile Services:

Google Maps: With layers in Google Maps, view geographic information, such as My Maps, Wikipedia, and transit lines, right on the map.
Gmail: Multiple accounts support and undo for common operations.
YouTube™: One-touch recording and playback from homescreen widget or app, one-touch sharing with friends, and the ability to view your own uploaded videos and high-resolution videos.
Google Talk™: Easily switch between chats, search your chat history, and preview pictures and videos sent by links.
Android Market: Browse and download applications created by third-party developers.
Calendar: Ability to see who has R.S.V.P.’d to your meeting invitations.
Facebook: Syncs Facebook contacts to your address book, and a live widget gives the ability to update status and view latest updates from friends.
Amazon MP3 Store: Download the latest tracks over the air.
Verizon Wireless Visual Voice Mail: Delete, reply and forward voice mail messages without having to listen to prior messages or voice instructions.
Pricing and Availability:

DROID by Motorola will be available in the United States exclusively at Verizon Wireless Communications Stores and online on Friday, Nov. 6, for $199.99 with a new two-year customer agreement after a $100 mail-in rebate. Customers will receive the rebate in the form of a debit card; upon receipt, customers may use the card as cash anywhere debit cards are accepted.
Experience the all-new DROID by Motorola at www.droiddoes.com.
To get the most from DROID by Motorola smartphone, customers will need to subscribe to a Nationwide voice plan and an Email and Web for Smartphone plan. Nationwide voice plans begin at $39.99 for monthly access for 450 minutes and an Email and Web for Smartphone plan is $29.99 for monthly access.
For additional information on Verizon Wireless products and services, visit a Verizon Wireless Communications Store, call 1-800-2 JOIN IN or go to www.verizonwireless.com.