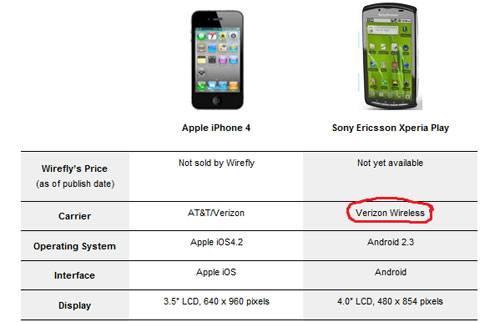 We have seen all the images and know just about all there is to know about the Xperia Play smartphone. We know the smartphone is coming on February 13 for its official introduction. We also know that in the UK the smartphone will land on the Vodafone network.

In the US, the carrier has been tipped as Verizon. The tip comes by way of Wirefly with a comparison of the Play and the iPhone 4. In the chart from the photo above the carrier for the play is noted as Verizon. That would be no surprise really; I would be more surprised to see the Play hit AT&T.

If you managed to miss the specs of the Xperia Play, you can see them in the chart. The phone runs Android 2.3, has a 4-inch screen, and slide out game controller that should make it a serious portable gaming device.