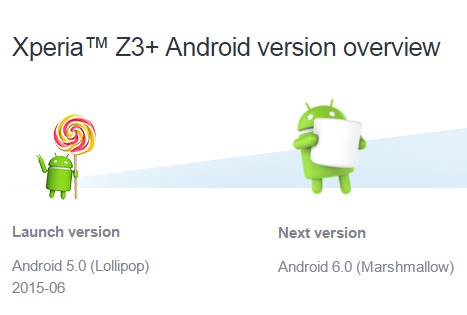 The slow “exodus” from Android KitKat to Lollipop was quite frustrating for some users. And when Android 5.1 (and its consequent minor updates) arrived, it became another waiting game. So Android users have learned not to hold their breath while waiting for the newest one, Marshmallow 6.0, which was just recently released by Google. Some Sony Xperia devices will reportedly not even pass through 5.1 but go straight to 6.0.

As of now, several H1 Xperia devices have still been waiting to be upgraded to 5.1, like the Xperia Z3+, Z4 Tablet and other 2015 mid-rangers such as the Xperia C4, C5 Ultra, M4 Aqua and M5. Currently, the only ones running on Android 5.1.1 are the Xperia Z5 and Z5 Compact. But that’s only because they were recently released and came with 5.1.1 out of the box. While there isn’t any large clamor for the most updated Lollipop, of course you’d want your device to sport the latest build of your platform.

But according to the Sony Mobile support page itself, the next update for these devices will no longer go to 5.1.1 but will go straight to Android 6.0 Marshmallow. However, no date was provided as of yet, but looking at the pace of their roll-put, it will probably be sometime by the end of the year. So it will still be another round of waiting probably, especially if you already want to experience what the Marshmallow is all about.

Of course, this is good news for the owners of the aforementioned devices right? (unless you really, really wanted to have 5.1.1 for some reason) As for the other older devices, no word yet on whether they will also be Marshmallow-ized soon.