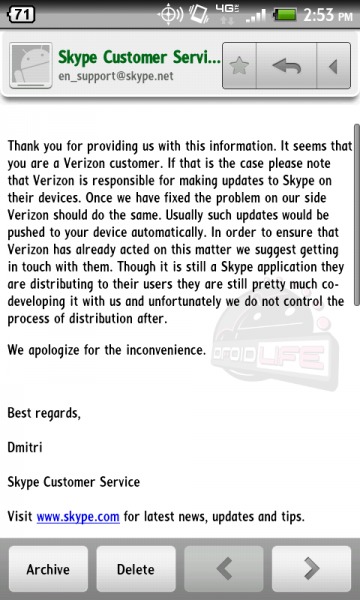 Word on the street is that Skype has finished testing it’s Video feature on Android handsets and is waiting for Verizon to distribute. The news came from a support reply to a query by Android user “Dmitri.” The issue is that Verizon controls updating of Skype to phones on their network and as such, users have to had to wait patiently for it. Skype has a partnership with Verizon, so it makes sense that they wouldn’t release it without Verizon’s “check.”

But Verizon may be overly patient to release it until any data vulnerabilities have been ironed out to their liking. As we reported last week, an enterprising hacker could harvest data from a user’s device using a rogue app without the user’s knowledge or permission. Skype replied that it did exist and then a week later, removed the vulnerability. So it would seem only a matter of time before users can enjoy video chat over Verizon’s 4G/LTE network.

That would be great news for users of the HTC Thunderbolt, Droid Bionic, Samsung tablet users who want a video chat solution over 4G. A beta version had been leaked a few weeks ago that users could try out, but that was before Skype’s attention was focused on the vulnerabilities. So users would well advised to
wait for the official version if security is more important to them than allowing their friends to see their mug via video. But when Verizon does release the new video Skype update, you can bet 4G users will be happily saying “can you SEE me now?”