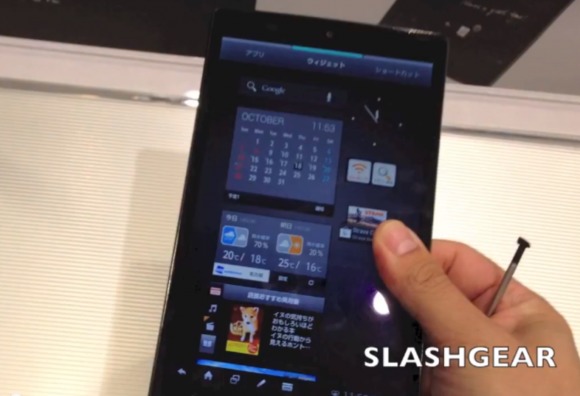 Yesterday, we told you that Sharp announced its new AQUOS TAB SHT21 7-inch tablet with an IGZO screen. Well, our friends at SlashGear wasted no time getting their hands on the device and finding out what the IGZO screen has to offer. This new screen technology promises better battery life or a much brighter screen, depending on user preference.

As we expected, the tablet features 4G LTE, WiFi a/b/g/n (2.4/5GHz), Bluetooth 4.0, and 1-Seg digital TV connectivity, which are standard for Japan. It runs Ice Cream Sandwich on Qualcomm’s 1.5GHz dualcore MSM8960 processor. It packs 1GB of RAM and 16GB of internal storage. It’s not exactly anything new in terms of specs, but the new screen technology is what drew the attention.

Most of the time, the IGZO screen, with its smaller pixels, looks just like a standard LCD screen, but with much less battery drain. However, SlashGear noted that when the brightness was cranked up to maximum, it is significantly brighter than traditional tablets. SlashGear was not able to take the device outside, but they said it seems that the tablet would have no problem being used outside in bright sunlight, which is one of the IGZO screens main claims to fame.