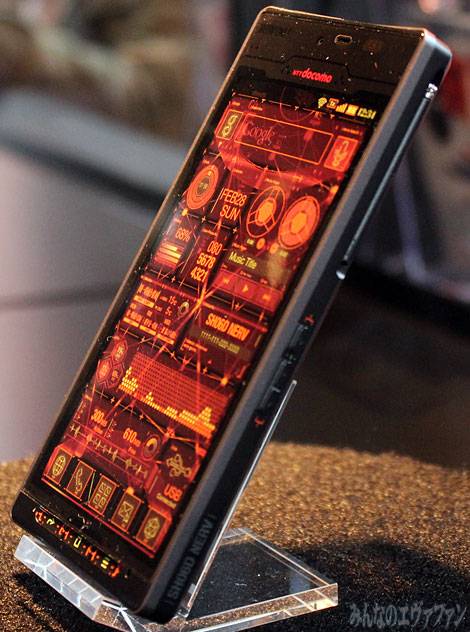 I’ll admit, I was a little skeptical when I read that Sharp and NTT DoCoMo were releasing a modified version of the Japan-only AQUOS SH-06D to coincide with the release of the latest Neon Genesis Evangelion movie. “That’s nice,” thought I, “it’ll probably be a mildly lame tie-in with a themed case and a few ringtones, like the R2-DROID-2.” Yeah, apparently not. Fan site EvaGeek.org got a loot at a preview for the upcoming device, and the level of thought and care that’s gone into it is astounding.

First there’s the case itself. No mere sticker job, the plastic has been molded and painted to resemble a sci-fi phone from the land of giant fighting robot/alien/biomonster things. Note the NERV logo on the back, implying the military organization in the cartoon. Even the Android navigation buttons have been themed to match the aesthetics of Evangelion. A few subtle additions to the sides and top of the phone keep the theme going.

But what’s really amazing is the software work. The mocked-up homescreen looks almost exactly like one of the see-through computer consoles used in the series. While the interface looks admittedly busy, it still manages to feature a monochromatic version of all the standard Android Gingerbread functions, plus a dozen or so customized widgets for the date, music, battery percentage and so on. It looks like a nightmare to actually use, but Evangelion fans won’t mind: one of the things that allows sci-fi gadgets to looks so cool is that real people don’t have to use them. 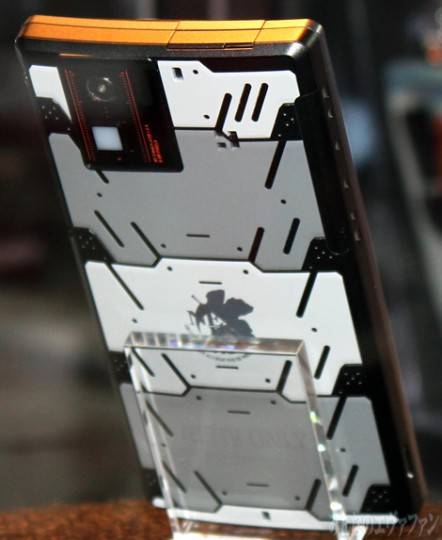 The AQUOS SH-06D is an otherwise typical high-end Android smartphone, with a 4.5-inch 720p display, 1.2Ghz dual-core processor and Android 2.3. There’s still no concrete release date or price for the Evangelion version, but the odds of it getting out of Japan are very slim indeed. Dear HTC/Samsung/Motorola/ASUS: build me a Star Trek-licensed PADD with a functional LCARS interface that looks this good, and you may have all of my monies.