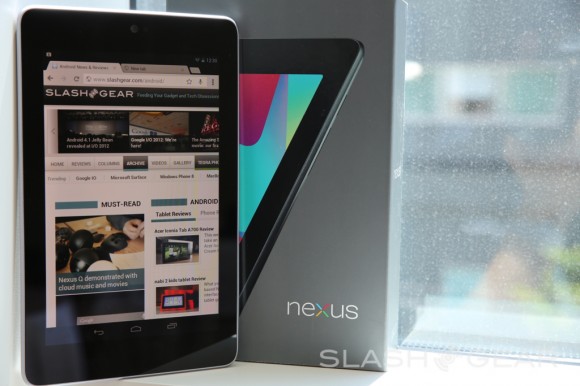 Tis the season! With plenty of holiday cheer to go around our good friend Santa has arrived a bit early to offer up a few Nexus 7 3G tablets to a few lucky readers. For those interested in getting their own little gift from none other than Secret Santa, head to our sister site SlashGear for their Nexus 7 Holiday Giveaway!

This year Santa has the awesome and ever so popular Nexus 7 3G HSPA+ tablet and a $25 Google Play gift card up for grabs. Not just one either, SlashGear has five Secret Santa packages they’ll be sending out this year to lucky readers. We will be sending a few out before Christmas, and the rest at New Years to kick off 2013 right. Read on for the details.

Start by reading our Nexus 7 review should you have any questions on the Android 4.2.1 Jelly Bean quad-core Tegra 3 tablet, then you’ll be heading to the SlashGear Facebook thread to kick off your chances at winning one. Don’t forget to like SlashGear, and while you’re at it like Android Community on Facebook too.

For full details on how and when you can win your own Nexus 7 + mobile and a $25 Google Play Store gift card head to the official SlashGear Holiday Nexus 7 Giveaway!

This giveaway starts on Monday, December 17th, 2012 and runs until Wednesday, December 28th at midnight. We’ll pick a collection of our favorite entries and from that set we’ll choose five winners at random, three of them in the next three days then two more on the 28th – we’ll announce the winners as soon as we get in contact with them – be sure to have your Facebook settings open to messages from SlashGear!

Competition is open to residents of the US only, over the age of 18. One entry per person. Family members of ASUS, Google, NVIDIA, and SlashGear/Android Community are not permitted to enter. Competition entries are only accepted via the specified SlashGear Facebook page; entries left in the comments section of this or any other post will not be recognized.

The winners will be contacted by an Android Community/SlashGear staff member upon being selected and will be expected to respond to that staff member; they will be expected to respond within 24 hours else their prize may be forfeit and another winner selected. Editors decision is final and no correspondence will be entered into. Winners agree that their name and details of their entry may be used for promotional purposes by, but not limited to Android Community, SlashGear, and NVIDIA.

Prizes consist of a pack including one Google Nexus 7 + mobile tablet and a $25 Google Play gift card. There are no other alternative for prize winners unless this prizes become unavailable, in which case SlashGear reserves the right to substitute another prize of equal or greater value.

Giveaway provided by SlashGear. Prizes provided by Secret Santa for SlashGear readers! Any questions regarding this giveaway should be directed to giveaway [AT] slashgear.com.