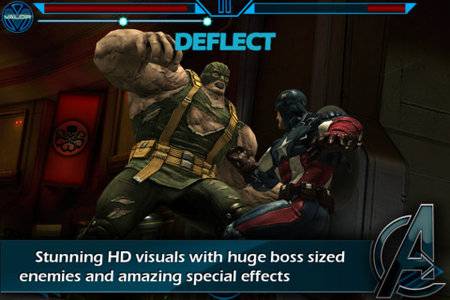 The first episode of Avengers Initiative is still relatively young, but that isn’t stopping about Marvel Games from talking about what will be going down in episode two. Today we’re finding out that you’ll be able to play as Captain America in episode two, though unfortunately we don’t have a release date for the episode just yet. Still, the news that Captain America is featured in the next episode should be enough to get many players excited.

Captain America’s segment of the story will have him tracking down a mole within S.H.I.E.L.D., so obviously you won’t be able to smash everything in sight like you did with the Hulk. We’re not sure how much gameplay will change between the Hulk and Captain America episodes, but there are enough differences between the two heroes that we can’t imagine both will play exactly the same.

As stated above, there’s no word on when episode two will be going live (though it should be available soon), but it does have a price. Marvel will be selling the next Avengers Initiative episode for 10,000 ISO-8, which is the in-game currency for the title. If you don’t want to take the time to earn that much in-game money, you can always buy that amount for $0.99 and unlock the new content immediately. It’s nice that Marvel is letting players pay with in-game currency, as it means that some players will be able to unlock Captain America’s new episode without ever paying any real money.

Those who are still playing Hulk’s episode are getting some goodies too, with everybody’s favorite big green superhero getting a handful of new costumes to use in-game. More episodes will follow the one that adds Captain America, with these upcoming episodes adding the likes of Iron Man and Thor to the game. It looks like Marvel will be supporting Avengers Initiative for a while yet, so if you haven’t checked it out yet, you can grab it from the Google Play Store for $4.99 [download link].