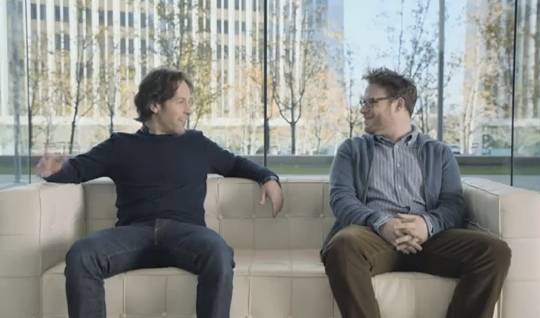 Samsung released the “El Plato Supremo” teaser video a few days back and as promised — they have since released the follow-up video. This commercial has dropped on the Samsung Mobile USA YouTube page, sports the title of “The Next Big Thing” and brings the return of Seth Rogan and Paul Rudd.

The full commercial measures in at a full two-minutes in length and has Rogan and Rudd offering competing pitches to see who will represent The Next Big Thing for Samsung. In fact, description aside, you get a sense of that right from the beginning. The commercial begins with both actors telling each other about how Samsung called them in. Of course, from this point they go into taking jabs at each other.

The Samsung technology comes into play as we see that each have been given a Galaxy Note II. They even managed to get in some of the features such as being able to search the web, take images and then touch up images with the S Pen. Well, as it turns out, they are both working for Samsung together. Later in the commercial, LeBron James also makes a cameo appearance on a tablet.

That all being said, as we mentioned after we saw the one-minute “El Plato Supremo” teaser — Samsung has yet to show off anything new in these commercials. Needless to say, they have done a fairly good job of showing off their current lineup while at the same time giving the viewer something to laugh at.