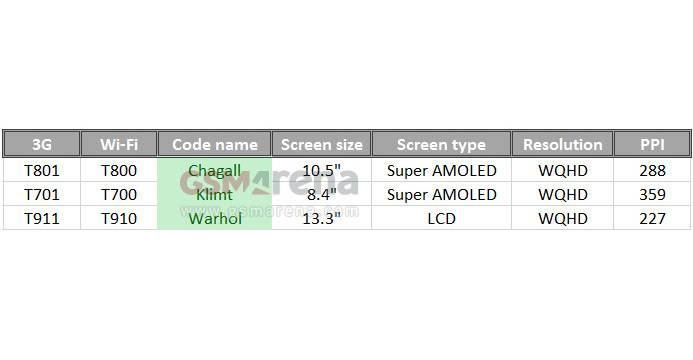 It seems that Samsung isn’t content with its gigantic 12.2-inch Galaxy Note Pro. This latest leak divulges three of Samsung’s upcoming tablets, including one with an even more gigantic 13.3-inch screen.

Also included in this insider information are two AMOLED tablets. Since December, Samsung has already been rumored to be returning to AMOLED for its tablets. Just last week, one such tablet, the Galaxy Tab S, was named. This tablet is believed to sport the new Exynos 5 octa-core CPU and a WQHD 2560×1600 screen, albeit in a strange 10.5-inch size. A little smaller but equally strange is an 8.4-inch model, with the codename “klimt”. This one also has the same WQHD resolution on a smaller space, giving it a rather high pixel density of 359 ppi.

Perhaps unexpected is the revelation of an upcoming gargantuan tablet. The 13.3-inch “Warhol”. While it has the same WQHD resolution, given its size, it also has the lowest ppi at 227. The T in its model name, T911 and T910 for the 3G and WiFi-only models respectively, imply that it will be part of the Tab series rather than an S-Pen enabled Note. Unlike the other two, it will not be lucky enough to have an AMOLED screen but will instead go with the usual LCD technology. Other than that, not much else is known about this tablet, even in rumors.

The biggest, pardon the pun, question is whether there is any market for this strange and awkward size. 13.3 inches is large enough for a notebook, but Android laptops have had less success than Chromebooks. Considering that the Galaxy Note Pro and the large Galaxy Tab Pro 12.2 are believed to not be selling well, this is a rather risky investment for Samsung. Then again, the Korean manufacturer hasn’t exactly been known for being cautious when saturating the mobile market with every hardware configuration known to man.