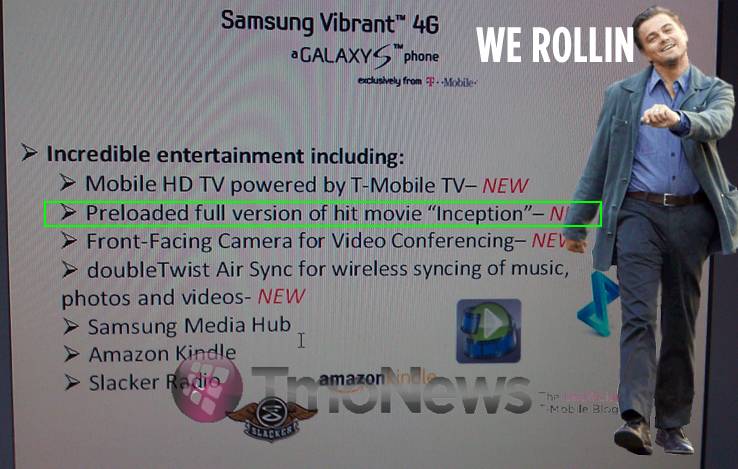 In a strange move to promote their brand new (so new it’s not even technically supposed to be announced yet) 4G phone the Samsung Vibrant Plus, T-Mobile will be shipping the phones with the movie “Inception” loaded on them for viewing right out of the box. This is obviously meant to seem like it’s to show the power and capabilities of the 4″ Super AMOLED Touch Screen with 480×800 pixel resolution and Mobile HD TV powered by T-Mobile TV, but is it a ploy to blow the phones off the rack? Judging by the numbers and stats they’ve given on sales of the original Vibrant, we’ve gotta lean more toward the former.

But then again, they know what they’re doing, so who knows? TmoNews has leaked a spec sheet with notes saying that the original Vibrant has sold nearly 1 million units to date and is the “#1 selling Galaxy S device across all US carriers.” Wow! And what does Leo say? He’s struttin. Can you imagine being part of a film that’s so big, they’re putting it on cellphones? What a weird age we live in.