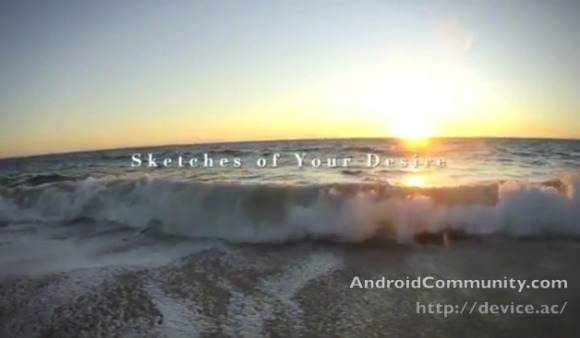 The big event in Berlin is soon approaching, IFA 2011 for all your tech desires – and Samsung is gonna be there with something big! What we’ve seen so far is one leaked trailer for this “Unpacked II” event, it inspiring quite a few guesses surrounding the Samsung Galaxy S II and what new version this Unpacked might reveal. Of course there’s no guarantee that we know what they’ll be revealing at all at the moment, especially since this Unpacked doesn’t have quite as obvious a tagline as the one we attended at CTIA 2011 which was “What’s your Tab Life?”

This video, the second one revealed but very possibly the first Samsung WANTED to have revealed, as the first was certainly leaked, we see a summer sky, shiny trees, sunlight all around, waves washing in from a lovely ocean, two people: one a lady moving in slow motion with wind blowing her hair, another a fellow with hair blowing as well, then the line “Sketches of Your Desire.” This line comes before “Something Big is Coming”, both of these sets of words appearing in the other video we’ve seen as well. Have a look at both here:

The first time we saw an Unpacked event this year it was at CTIA 2011 and we were given a look at the Samsung Galaxy Tab 10.1 and Tab 8.9 which we’d seen up close and personal the night before. What we’re still thinking might be thinking is going on here is a Samsung Galaxy S II upgrade of some sort, maybe a 4.5-inch screen like the Infuse 4G, maybe some sort of mega-announcement we can’t even guess! What do you think?