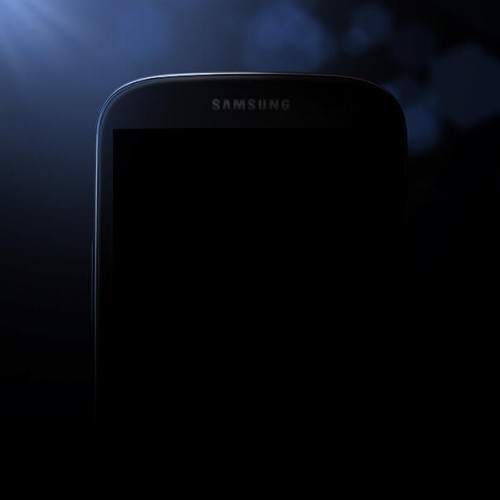 Samsung is having fun teasing us with its soon-to-be-unveiled Galaxy S IV, the next iteration of the wildly popular Galaxy S III. As if the teaser video trailers it released this month featuring a boy and his box weren’t enough, the company has now tweeted an image showing just a corner of the Galaxy S IV, which is otherwise hidden in shadows.

The tweet announces that the countdown to Samsung’s event in New York City later this week has officially begun. “Who’s ready for the Global Unpacked Event?” it asks. Aside from that, there’s nothing else – we’ll have to wait until Thursday to find out the details. This tweet came a short while after the company released the second video in its teaser video trailer series for the handset.

In the first video in the series, the boy is shown receiving a box, which he rushes home with. In the second video, he arrives home, and between dodging his crush and dealing with his mom, he takes the box into his room and cracks the lid open. Unfortunately, instead of getting to see the handset, we instead see a stunned look on his face and quite a bit of glowing from inside the box.

Also cropping up earlier was a patent filing that suggests the Galaxy S IV could sport 3D processing and camera technology. If the patent does pertain to the upcoming handset, the Galaxy S IV could end up offering post-shot image processing for 3D images, as well as 3D videos, meaning there won’t be a two-camera setup. Just for fun, check out the “4” on the event invitation – it is 3D. Maybe Samsung was hinting at this feature? We’ll know for sure Thursday.