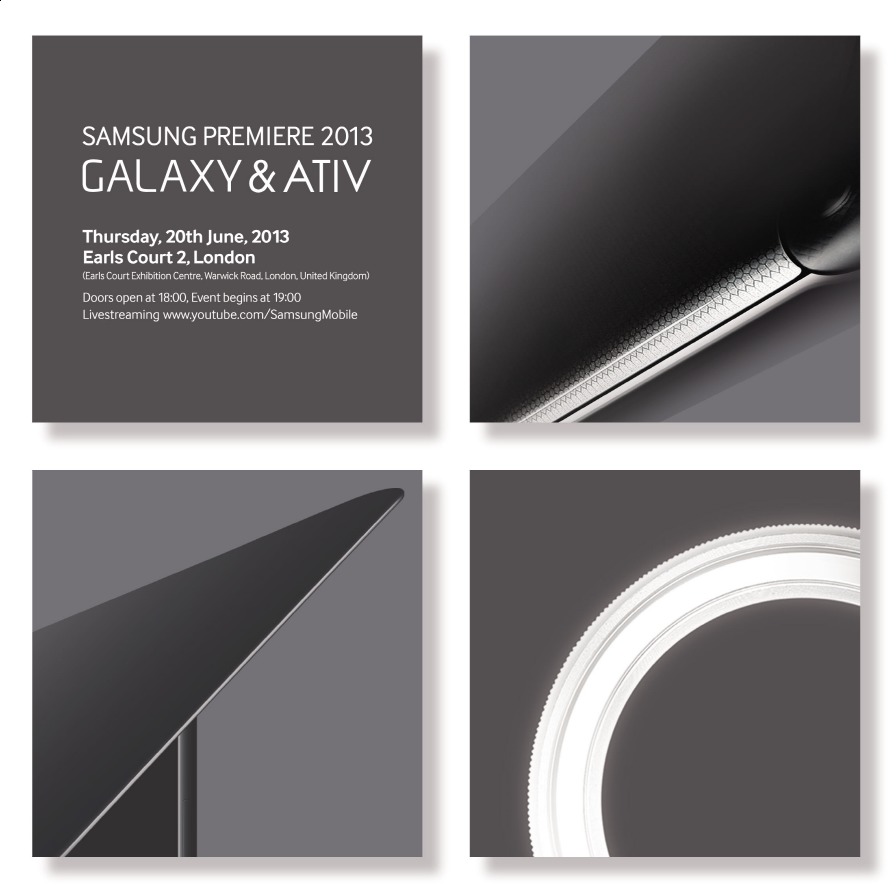 Samsung will show off its latest Galaxy Android devices at a UK event on June 20, the company has confirmed, with the invite to the London show teasing a range of new hardware. The event, dubbed “Samsung Premiere 2013“, will feature tech from Samsung’s Galaxy Android range as well as its ATIV Windows line-up, presumably including both phones and tablets.

Exactly what will be on the agenda this time around is unclear, though there are some obvious possibilities that have surfaced through the Samsung rumor-machine over the past weeks.

For instance, the Galaxy S 4 Active is expected to be a ruggedized version of the Galaxy S 4, complete with a metal casing. Alternatively, it could be Samsung headed in the opposite direction, slimming the Galaxy S 4 down for the well-rumored “mini” version.

A third variation, meanwhile, could be the Samsung Galaxy S 4 Mega, another device which has cropped up in leaks of late. Exactly what makes the Mega so “mega” is unclear at this stage, though a larger screen seems likely.

As for tablets, there are a couple of options Samsung could wheel out. The Galaxy Tab 3 is believed to mark a switch – at least partial – from ARM-based chips to an Intel processor, at least according to benchmarking leaks.

Beyond that chatter of a new 7-inch Galaxy Tab slate, of course Samsung could opt to unveil the Galaxy Note 3 ahead of its (assumed) schedule. We’ll know for sure on June 20, with the event kicking off at 6pm BST (1pm ET/10amPT) and also being livestreamed.