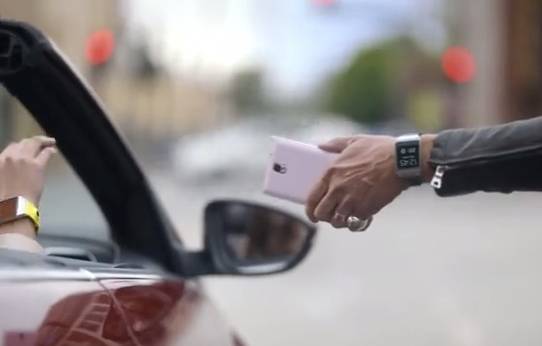 Samsung has dropped a new promo video, this time pushing the Galaxy Note 3 and showing the Galaxy Gear. The video is staring Robin Thicke and comes by way of the Samsung Mobile YouTube channel. We suspect some may question the celebrity approach, but more important, this time around Samsung is showing Action Memo being used with the S View Cover.

The video is simple, Robin Thicke pulls up on a motorcycle and when the girl in the car realizes who he is, she snaps a picture with her Galaxy Note 3. Right from here you get a sense of using the opening on the S View Cover. She uses it as a viewfinder to capture an image. He then asks for her phone and makes use of the window in another way — to write a note.

Aside from trying to move forward with the celebrity aspect, Samsung has managed to show the Galaxy Note 3 and the S Pen in action. Not to mention, the Galaxy Gear appearing on not one, but two wrists. Anyway, regardless of what you may think of this promo video, it seems Samsung likes the idea. To that point, this is just part one with parts two and three set to follow.

Those later videos will change the focus from Action Memo on S View Cover to Multi Window and then Smart Relay. That said, while the Galaxy Note has sold well over the years, there is still some question in terms of Galaxy Gear sales. Samsung recently rolled out a decent update improving the notifications, however the last we heard was the shipments were sitting in the 800,000 range.