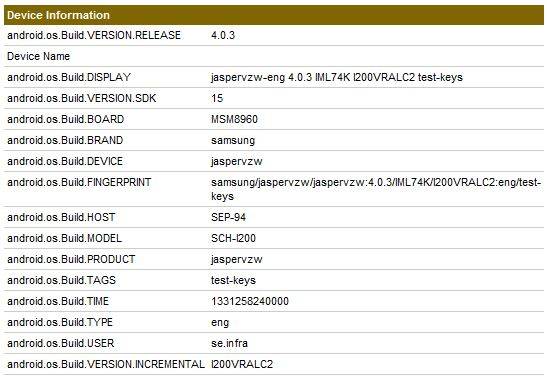 News on new Samsung phones for Verizon has been a little dry as of late – their last major release for the carrier was the Galaxy Nexus five months ago. But new details about an upcoming phone were uncovered on the Bluetooth SIG website and GL Benchmark describing the SCH-i200 “Jasper”, complete with Verizon tags in its software. Most interestingly, it’s running Ice Cream Sandwich and Qualcomm’s celebrated Snapdragon S4 MSM8960 dual-core processor.

Other details are scarce at the moment: beyond Android 4.0.3 (and presumably the latest version of TouchWiz as an accompaniment) we know it’s got an 800×480 screen. That puts it at anywhere between 3.5 and 4.3 inches, but given Samsung’s propensities as of late I’d say that either 3.7 or 4.0 inches are the most likely candidates for screen size. Unless Samsung surprises us and announces a Verizon version of the Galaxy S III on May 3rd, the “Jasper” could be Samsung’s first Ice Cream Sandwich device on Big Red.

The SCH-ixxx series has tended to be rather low-end phones from Samsung – not something we’d expect to see a cutting-edge processor and OS running on. The SCh-i200 sounds like a something between the low-end and the mid range, so it should present a pretty good compromise between size, features and price. It also gives us some hope that Samsung is seriously working on releasing new phones at all price points running Ice Cream Sandwich.