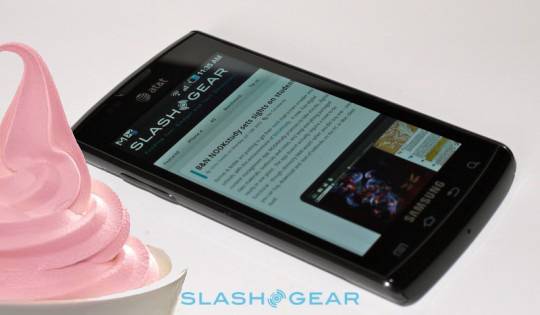 News leaked out today that an Android 2.2 (Froyo) update for the Samsung Captivate was imminent and the evidence was the update page itself. Then, it appears Samsung heard about it and promptly pulled the page with no explanation given. Originally, the update was to be rolled out via the “Kies Mini” method, rather than traditional over the air option. Last week, AT&T Captivate users were given hope the change was coming with the news that support for the frozen dairy desert OS was being added, so why the Samsung page was being abruptly pulled is anyone’s guess.

Changes are rumored to include a new home page tips widget that helps configure the screen with shortcuts. There’s also to be improved security with the addition of alpha-numberic password options and Exchange policy enforcement. Remote wipe should also be coming through the Exchange administrator desktop as well. Other additions include the popular item on anyone’s want list, that of support for up to five users through the portable hotspot option with tethering and the ability to use the phone as a modem, a self timer for the camera/camcorder, and better kernel memory management. Only time will tell is Samsung will actually release the update or use the stock “it was a placeholder page” excuse to back away from it. But one thing is certain, Captivate users are read and waiting for it.

Until then, if you can’t really wait, Android Community has a page on how to root your phone and install it anyway.