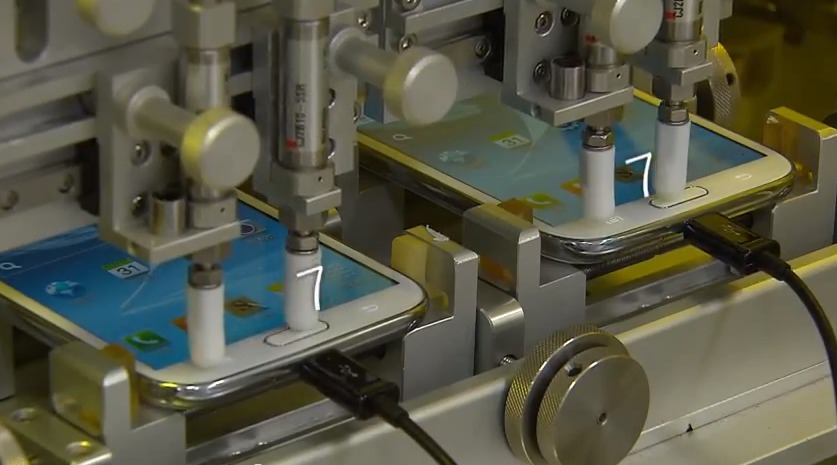 Ever wonder what type of process smartphone manufacturers go through to make sure their devices will stand up to the test of time, or the elements we all put them through? We’ve seen these before but today SamsungTomorrow has posted a brand new video showing us the Galaxy S III and Note II getting put through the paces. The video isn’t in English but still fun to watch them click the home button 20 thousand times.

While you don’t really learn anything here, it’s nice to see Samsung is testing their home button longevity, bend tests making sure devices can handle odd movements. They even have a little booty machine that simulates someone sitting down on your smartphone and more. That’s just a few of the many tests being performed in this odd video.

Subtitles would be nice, but they aren’t necessarily needed as we know good and well what is going on the entire video. They do bend tests (which made me cringe) drop tests of their own, water tests, and much much more as you clearly saw from the video above. After watching the video it sort of makes sense why they choose to use plastic for their housing. It has a lot more give in some of these circumstances where aluminum or ceramic wouldn’t.

Samsung’s Galaxy S III has sold more than 30 million devices worldwide, and just earlier today we announced that the Note II has already passed the 5 million milestone. There’s no denying Samsung makes some of the absolute best smartphones on the planet. It’s fun to see what goes on behind the scenes in these videos. Oh and don’t follow this videos lead and use your Galaxy S III in the shower. That probably isn’t a good idea.