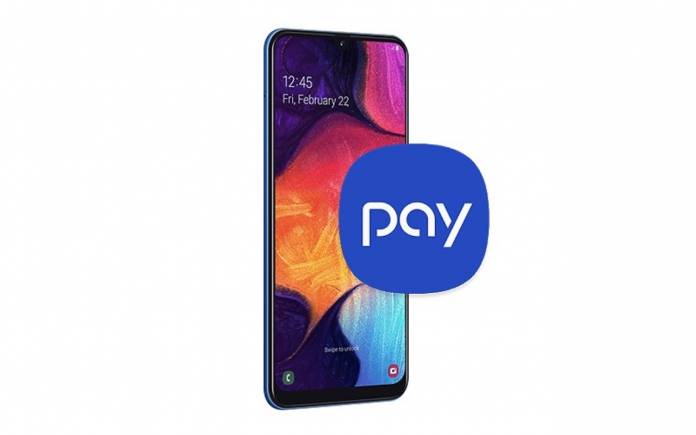 The Samsung Galaxy A50 was earlier announced as major mid-range upgrades. That was in February but we had no word then when the phone would be arriving in the United States. A recent change within the Samsung Pay app somehow hints that it’s happening very soon. The mobile payment’s app for Android has update notes that list a Galaxy A50 US now supported by Samsung Pay. It’s actually written as “A50 US” which we’re assuming refers to the Galaxy phone.

Samsung Pay on a Samsung Galaxy A50 can be expected if we are to believe the update notes on the app. Samsung is careful to note the mobile app is incompatible with most devices–only select Galaxy devices.

Aside from the Samsung Galaxy A50, these other phones are also expected to be ready for US release: the Galaxy A20 and the Galaxy A70. The Galaxy A50 is said to be FCC-certified already which only means one thing: ready to be announced in the country.

Details are scarce but there’s information from one of our favorite sources, Evan Blass, saying the phone will be sold by all major carriers in the US later this June–just in time for Summer. Let’s just wait and see for either Samsung or any US network to make an official announcement. We know it’s going to happen because we don’t see any reason why not. And yes, Samsung can take this opportunity while Huawei and Honor are not welcome in the country.