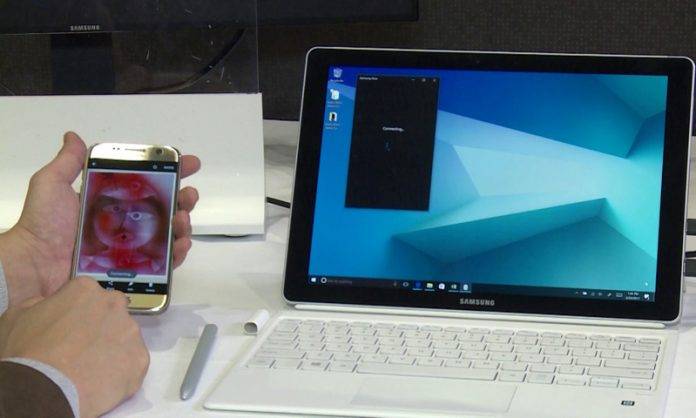 Samsung just recently announced a 2-in-1 device – yes, and we’re mildly surprised that they’re into those as well and it’s not just an ASUS or Lenovo thing – called the Samsung Galaxy Book. It’s a Windows-powered tablet that is targeted for productivity-leaning users, and those who work on the go. But this device also slots in seamlessly with your Samsung Galaxy smartphone through the Samsung Flow ecosystem.

We wrote about Samsung Flow before, and it was an app that basically made things easier for people who owned a Samsung tablet and a Samsung Galaxy smartphone. It was initially available only for the Samsung Galaxy TabPro S, but now Samsung is incorporating some Windows 10 devices, starting with the Galaxy Book.

The premise is really simple – pair your Galaxy devices (tablet and smartphone, in this case) and experience convenient authentication and unlocking via both devices. You can unlock your tablet using the fingerprint sensor on your Galaxy smartphone and never have to authenticate twice again. You can also seamlessly beam content from one device to the other, and also reply to notifications on your smartphone from the tablet, if you’re working on something and can’t be bothered to pick up your phone.

It’s something you’d recognize if you’re using a Mac and an iOS device, and how we wish there would be something universal like this on Android. But this is a good start, although it only works for Samsung-branded devices. There are a lot of third party app solutions out there for Android devices as well, but none as streamlined as this.