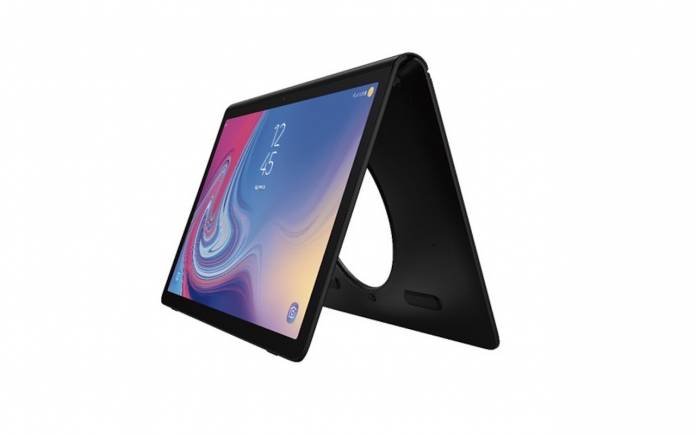 Remember the Samsung Galaxy View? It’s the very large tablet-display released in 2015. It’s the massive 18-inch tablet that was designed for the whole family’s entertainment needs. It made an impression a few years ago mainly because of the size. It’s useful especially for those who like to watch their favorite TV shows and movies anytime, anywhere. Your smartphone or small tablet may be enough but watching on a bigger display is always better. Mobile carriers offered the Samsung Galaxy View like AT&T and Verizon.

Nothing much has been heard since then but last year, we reported Samsung may release a slightly smaller Galaxy View. No update has been provided until this week when SamMobile shared renders of the future Samsung Galaxy View 2.

The new Galaxy View model is said to arrive with a hinged stand that is more ergonomic. This will make typing more convenient for users. Using the movable display will be easier too.

AT&T will release the Samsung Galaxy View 2 in the US as with the first model. It’s not clear though if the device will arrive unlocked. We’re expecting a WiFi variant and probably a cellular version. Don’t expect a 5G version yet but you know, anything is possible.

The Samsung Galaxy View 2 already appeared on Geekbench a few months back. The SM-T927A device is listed with 3GB RAM, Exynos 7885 processor, and Bluetooth and Wi-Fi certification.

The next-gen Samsung Galaxy View 2 will have a smaller 17.5-inch display. The hinged kickstand is positioned at 30-degrees when stowed. The integrated handle is gone so transporting it may be a bit challenging although there is a hole on the kickstand’s rear. This means it will be lighter.