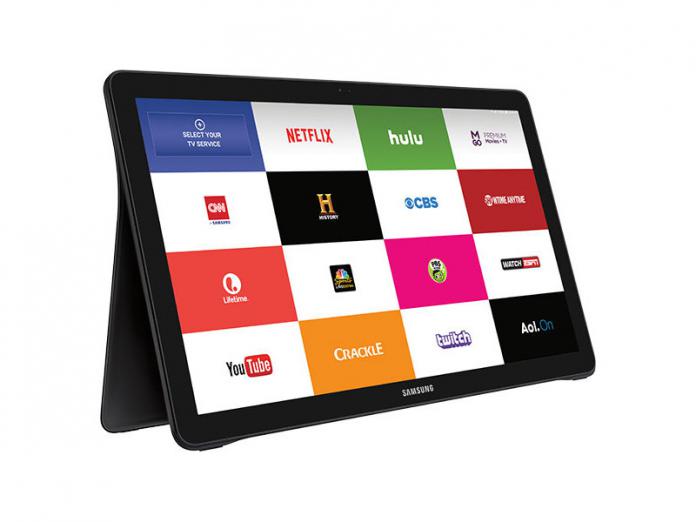 When the Galaxy View was released almost three years ago, people made all kinds of jokes about its size and how “convenient” it is to be lugging around an 18.4” tablet. But really, there was nothing like it in the market and eventually people realized it really wasn’t meant for portability but rather, it served as a giant monitor for when you want to view videos outside of your TV. Now it looks like Samsung is getting ready to release the second generation of this device, let’s call it the Galaxy View 2, and it might be slightly smaller than the original.

The rumored new tablet will have a 17” display, making it a bit more practical if you wanted to lug it around somewhere. And unlike the original one which you can only charge through an AC power adapter, this one you can charge through USB-C. It will also have a more convenient book-style hinge instead of the handle that was used for the Galaxy View. The closed position will let you angle the tablet around 30 degrees upward, like you would with a drafting table. The open position will let you keep the screen upright like with a laptop for better viewing.

The Galaxy View 2 will reportedly still use an Exynos processor and will have a 1080p display and a 17.5” display. It may still be a bit too big to be able to carry around with you like a laptop but you probably won’t be able to use it like that anyway. It only has 3GB RAM but you also have support for a microSD card. It will be running on Android Oreo and not yet Pie and it also won’t support the DeX mode from Samsung.

So if you can’t use it as a desktop replacement or mobile workstation, what can you use a 17” tablet for? Well just like its predecessor, it will mostly be for watching videos and having a touch-enabled device in your kitchen or backyard, in case you want to watch your shows or movies outside of your living room.

The Galaxy View 2 is also rumored to be partnered with AT&T, so you can also expect some DirecTV or other similar products involvement. No news yet as to the timetable for the announcement and release of this device but we’ll keep our ears to the ground.