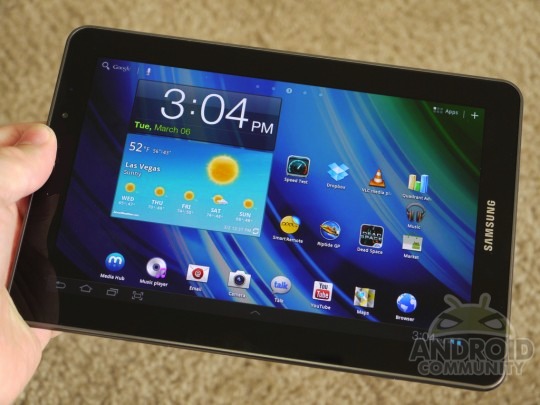 Samsung’s line of Galaxy Tabs are pretty nice, but only one rocks their impressive Super AMOLED technology. That being the Galaxy Tab 7.7 that has been available for some time. However, multiple reports have surfaced over the past few weeks suggesting Samsung is preparing to offer those same beautiful displays in full 1080p HD on an array of tablet sizes.

All their tablets but the one mentioned above have been LCD displays, but that will soon be changing. Last week we reported on a possible 11.6-inch Full HD Super AMOLED tablet in the works from Samsung with blazing high retina resolution like the Nexus 10, and now it looks like those same panels will be coming to smaller slates.

According to SamMobile Samsung is getting ready to start manufacturing full 1920 x 1200 full HD Super AMOLED panels for use in multiple upcoming tablets. In particular they mention the Galaxy Tab 8 (not a note) that will take on the next generation iPad mini, as well as Google’s rumored second-gen Nexus 7.

They go as far as to state this will be unveiled at IFA in late August at the Samsung Unpacked event, which will be Unpacked Episode II of the year. First being the GALAXY S 4 event. This means Unpacked could have Samsung pretty busy with the rumored Galaxy Note III, the Galaxy Tab 3 (10-inch) as well as this 8-inch slate mentioned today. It’s about time Samsung refreshes their tablet lineup, as they’ve been focusing all their attention on the Note devices as of late.

If they can deliver a Galaxy Tab 8 with a full HD AMOLED panel, Exynos 5 Octa 8-core processor, front facing speakers like current tablets and Android 5.0 Key Lime Pie all for a good price – I’ll take two. Stay tuned, it will be a busy summer for Samsung.