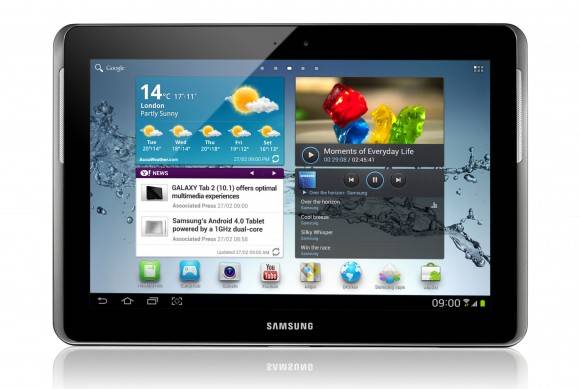 The sequel to Samsung’s 10.1-inch Galaxy Tab, being called the Galaxy Tab 2 10 has passed through the FCC again this week and has been given the stamp of approval. Originally the WiFi model hit the FCC a few weeks ago, but today’s model also is rocking some HSPA+ radios aching to AT&T’s network.

I must admit that Samsung really needs to figure out a better naming scheme then calling this thing the Galaxy Tab 2 10 because that is a bit confusing. Maybe if they didn’t offer every size under the sun they’d be able to come up with some clever names here. Either way it is good news to see this clearing the FCC, and with AT&T on board because as of now Samsung hasn’t made any plans clear regarding a US launch. Although we expect the tablet to arrive here in the US sometime here soon.

The Galaxy Tab 2 (both 7 and 10) appear to be rocking the same dual-core Tegra 2 processors, 1GB of RAM, and come with 16 or 32GB of storage. They’ve been slightly redesigned over the original models with the speaker grills front and center to appease the lawyers of Apple. The biggest change here is they are running on Android 4.0 Ice Cream Sandwich, something all the current Galaxy Tab owners are still patiently awaiting. We’ve heard reports that Samsung will be issuing updates in Q2 for most of their latest tablets but still have no solid date to report.

This FCC filing is good news for those stateside hoping to get the new Galaxy Tab models, especially one with 3G/4G HSPA+ connectivity. Until we hear more from Samsung we’ll just be patiently awaiting its arrival.