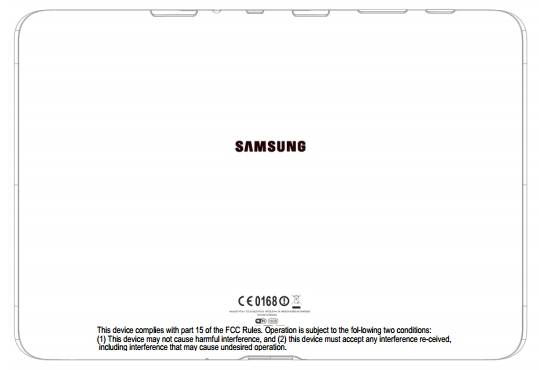 If it’s taken you this long to purchase a Galaxy Tab 10.1 and you’re not swayed by the Galaxy Note 10.1‘s fancy-pants stylus input, this one may interest you. The Galaxy Tab 2 (10.1-inch version – man, Sammy really needs to work on these names) passed through the hallowed halls of the FCC today. There was never any real doubt that the Galaxy Tab 2 was heading to the US, and will probably be available on one or more carriers as well as a WiFi-only version. That said, this looks like the advance guard international version that manufacturers tend to send through the FCC as a matter of course.

The 10.1-inch version of the Galaxy Tab 2 brings Ice Cream Sandwich and not much else to the original design. The same 1Ghz processor and 1GB RAM combo are present on the inside, with an identical 16 or 32GB of storage (though at least you get an SD card option this time. The screen is the same 10-inch 1280×800 panel, although the front fascia is a little remodeled to appease the lawyers in Cupertino with stereo speakers on either side. The real draw here is Ice Cream Sandwich (with Samsung’s customary TouchWiz, of course) but since the original 10.1 will get that anyway, you’re really payer for a new name, swappable storage and some front-facing speakers.

The model number of the tablet that the FCC is checking out is “GT-P5110”, which would put it just above the current Tab family in terms of Samsung’s hierarchy. As this is the WiFi model, no carriers are currently lined up, but it’s a distinct possibility. Samsung hasn’t said when the Galaxy Tab 2 will go on sale (or even if the 10.1-inch version will be coming to the US) but it’s more than likely that we’ll see it in multiple territories before May.