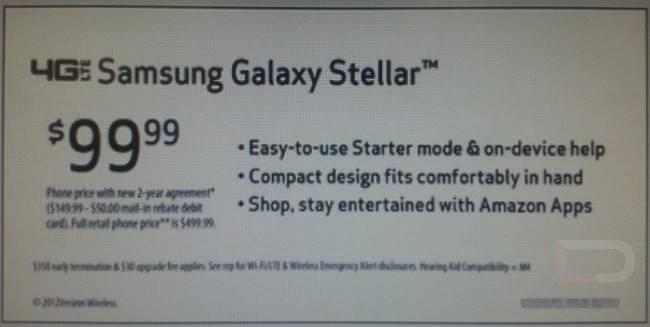 A new smartphone from the folks at Samsung is prepared to grace the Verizon Wireless network. It’s called the Samsung Galaxy Stellar and we don’t know much about it. Today some new details have been unearthed about this budget phone showing that it will hit Verizon soon for the low low price of just $99 dollars.

The above screenshot was gathered by Droid-Life and all it does is leave us asking questions. Back in March Samsung trademarked the Galaxy Stellar name, and now we’re about to find out more details on this mystery handset.

Obviously this will be some type of mid-range device considering Verizon will be asking $99 for the phone, but the odd part about this leak is the inclusion of Amazon Android apps and the “starter mode.” It clearly lists users being entertained by Amazon Apps, which leads us to think it will have their app store rather than Google’s. Why anyone would want only that options beats me, but Verizon and Samsung might know something we don’t.

Maybe this will be a near top end device only without the Google Play Store thus explaining the lower price point — but who knows. That also could just be an odd way of saying it will also come pre-loaded with Amazon’s options. It looks like the online retail giant either paid Verizon or Samsung a good sum of money. We should be hearing more soon as this device is set to hit the market for just $99.